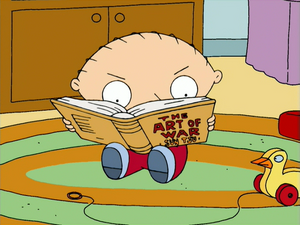 The Art of War is an ancient Chinese military treatise that is attributed to Sun Tzu (also referred to as "Sunzi" and "Sun Wu"), a high-ranking military general and strategist during the late Spring and Autumn period (some scholars believe that the Art of War was not completed until the subsequent Warring States period. Composed of 13 chapters, each of which is devoted to one aspect of warfare, it is said to be the definitive work on military strategies and Military tactics of its time, and is still read for its military insights.

In "A Hero Sits Next Door", after being disappointed that The Prince taught him nothing new, Stewie picked up The Art of War to read, but Lois caught him and took it away, turning on the Teletubbies instead.

Retrieved from "https://familyguy.fandom.com/wiki/The_Art_of_War?oldid=212039"
Community content is available under CC-BY-SA unless otherwise noted.