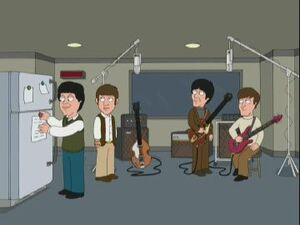 The Beatles were a British pop group made up of John Lennon, Paul McCartney, George Harrison and Ringo Starr from Liverpool, formed in 1960. They are still a very popular pop group, being a significant influence on the popular music of the second half of the 20th Century, having had a unique and continuously developing musical style.

In "The Thin White Line", a flashback shows Peter Griffin as a security guard for George Harrison, watching Charles in Charge and singing along to its theme song while an intruder invades the home. On the evening of December 30, 1999, Michael Abram broke into the Harrison's Friar Park home in Henley-on-Thames and stabbed George multiple times, ultimately puncturing his lung. Harrison and his wife, Olivia, fought the intruder and detained him for the police. 35-year-old Abram, who believed he was possessed by Harrison and was on a "mission from God" to kill him, was later acquitted on grounds of insanity. Traumatized by the invasion and attack, Harrison rarely appeared in public afterwards.

In "To Love and Die in Dixie", Stewie says he has "blisters on me fingers!", a reference to their song "Helter Skelter". After the eighteenth take, Ringo Starr flung his sticks across the studio and screamed, "I've got blisters on my fingers!" The Beatles included Starr's shout on the stereo mix of the song.

In "Ready, Willing, and Disabled", Stewie is the reason that Lennon and Yoko Ono meet.

In "Stewie Kills Lois", the lack of Ringo Starr's songwriting abilities is exaggerated in a cutaway scene started by Brian.

In "Welcome Back, Carter", Lois refers to McCartney when calling Heather Mills "Paul McCartney's ex-wife" as she remembers having dinner with her.

Peter tells the guys that their alibi while burning down Goldman's Pharmacy in "Burning Down the Bayit" is that there were seeing the Beatles show. A flashback to their 1964 show has Peter throwing his stained underwear on the stage.

Ringo Starr appeared in a cutaway in "Valentine's Day in Quahog" when a girl said she had a crush on him during a sleepover when the other girls noted their love for various members of the band. When he appeared before her, she quickly denied it.

Stewie "reminisces" with Rupert about The Beatles appearance on the Ed Sullivan Show in "Quagmire's Quagmire".

When Brian pledges to get a job in "Petey IV", he notes that he's not like Ringo. In a cutaway gag, Paul shows off the Sgt. Pepper album cover as Ringo notes that it won't look good on a CD. This leads the other members of the band to inquire if he is from the future as he tells of outliving John and George. When they press him for more details, he agrees on the condition that they do his song about the octopus. They agree but John and George head off to start the conditions that lead to their deaths.

In a 1969 "episode" of Family Guy, Peter clicks though several historical events including The Beatles 1964 appearance on The Ed Sullivan Show in ""Family Guy" Through the Years".

After becoming popular as the Pawtucket Patriot Ale mascot in "Pawtucket Pete", Brian rejects going to the public park due to his belief in 'Beaglemania', a pun on the phenomenon of 'Beatlemania.' His Bite Album is a parody of The Beatles The White Album.

Retrieved from "https://familyguy.fandom.com/wiki/The_Beatles?oldid=220597"
Community content is available under CC-BY-SA unless otherwise noted.