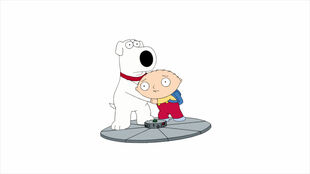 The Big Bang Theory
Stewie and Brian go back in time to stop Bertram from killing Leonardo da Vinci in order to erase Stewie, which would also delete the whole universe too.

Plot: After Lois leaves, Stewie tell Brian about wanted to order an item from a magazine. Brian insults Stewie by saying he would order the guy on the cover of the magazine. Stewie comes up with a terrible return insult, that causes Brian and Chris to mock him. Stewie plans to go back in time to top his insult Brian, which he does and succeeds. Stewie plans to go back in time to embarrass Brian again. He travels back to "The Courtship of Stewie's Father", when Brian is going to sing, "Peanut Butter Jelly Time", but Stewie steals his banana suit and sings to Peter, which cheers him up. Stewie later plans to mess with his former date with a Victoria's Secret model, which Brian finds out about and plans to stop. Brian and Stewie begin to fight for control over the machine, accidentally launching them outside the space-time continuum, where the laws of physics don't apply and where the Return Pad can't get them home. Stewie tells Brian that he can overload his Return Pad which would cause an explosion that would send them to the future. Stewie is reluctant, but Brian talks him into it by saying he would laugh at a joke that he would never tell to Stewie, unless he tried. Stewie did it and went back to the future. After research, Stewie finds out that his explosion was the Big Bang and that he created the universe. 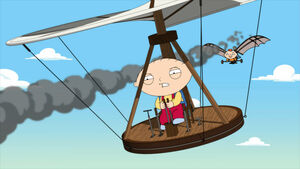 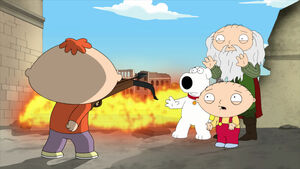 Retrieved from "https://familyguy.fandom.com/wiki/The_Big_Bang_Theory?oldid=222847"
Community content is available under CC-BY-SA unless otherwise noted.