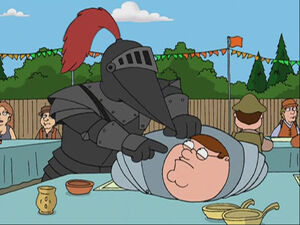 The Black Knight is the lead jouster at Quahog's Ye Olde Renaissance Faire. He is romantically linked to Maid Madeline, who also works at the Fair. He also drives a Yellow Hyundai. He was voiced by Will Ferrell.

This Knight appears in "Mr. Saturday Knight". In it Peter Griffin, recently and suddenly unemployed, decides to fulfill his childhood dream of becoming a knight. He gets a job as a jouster at the Ye Olde Renaissance Fair. When the Black Knight catches Peter and his wench in a seemingly-provocative situation, he tells Peter he never wants to see him there ever again, causing Peter to quit his job as a jouster. Later, when he saw Peter watching the jousting competition he insulted him by calling him a fizzle, which provoked Peter to joust against him. While charging at each other, Tom Tucker announced that the owner of the Yellow Hyundai had their car being towed, causing The Black Knight to lose focus long enough for Peter to knock him off his horse. It turns out Mort Goldman did it out of revenge.

Years earlier, while apparently experiencing an acid trip as a teenager, Peter found himself at the top of a fake castle at the Renaissance Fair. After proclaiming that he could fly, Peter jumped off the castle, thankfully being rescued by the Black Knight. From that night, Peter aspired to be a knight. Peter tried to tell him about that day, but the Black Knight was too busy shaving.

Although different in character design, Peter builds a moat in "Death Has a Shadow" to keep the Black Knight at bay.