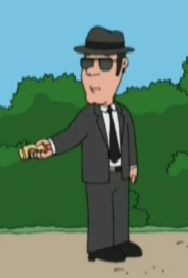 In "North by North Quahog", Peter Griffin drives through the mall pursued by Mel Gibson’s goons. The song “I Can’t Turn You Loose” also plays.

In "Sibling Rivalry", Stewie’s giving orders at the playground and quotes a flophouse resident in The Blues Brothers, “Did ya get me my Cheez Whiz, boy?” as Elwood Blues throws him his Cheez Whiz.

In Road to Germany", when the German sub crashes into the ocean floor, it is quickly followed a large number of crashing police cars. The DVD extends this scene with John Candy as the parole officer.

In Blue Harvest, the gang tries to act cool to sneak by Imperial Guards. The song "Minnie the Moocher" plays and they all slowly creep by doing a stealthy walk. In the movie, the brothers avoid cops while the song plays.

Retrieved from "https://familyguy.fandom.com/wiki/The_Blues_Brothers?oldid=214459"
Community content is available under CC-BY-SA unless otherwise noted.