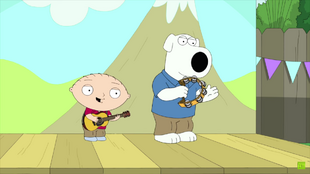 The Boys in the Band
Brian and Stewie form a children's band. 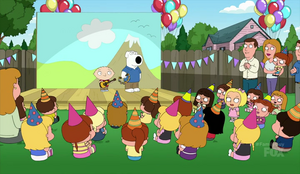 When Lois disapproves of a show that Stewie is watching with Brian, she tunes the television to a children's singing show, but their inane lyrics inspire Stewie to write baby songs himself and perform with Brian. After picking up a gig at a birthday party, they find that Stewie's old flame Olivia is present. When the act is a hit, Olivia lays claim to Stewie's attentions, leaving Brian to his own devices. She continues to hang out with the pair by becoming the president of their fan club, but after a performance, she tries to convince Stewie that he should dump Brian. At a performance at Bob's Funland Amusement Park, things come to a head and Stewie attacks Brian. After he departs, Olivia works Brian with the same tactic of dumping Stewie so she may take his place.

After Brian actually does fire Stewie and departs with Olivia. They get a gig at the convention center performing one of Stewie's songs and Brian observes Stewie crying in the audience. He has pangs of guilt and announces an end to their partnership, getting a true picture of Olivia's manipulative personality. He apologizes to Stewie and admits that Olivia had decided to replace him with another dog as Olivia is shown performing with Vinny. 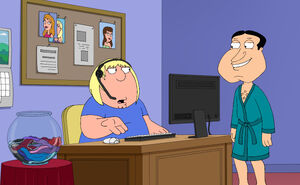 When Chris wants fifty dollars for a shamrock tattoo, Lois and Peter convince him to search for a job. While helping to unload groceries from the family car, they observe Quagmire fighting with a potential sex partner. After he wishes he had a personal assistant to help screen his liaisons, Chris is hired as his personal assistant. Chris takes to the job like a pro. However, when his “work” disturbs Lois, she gives him over a thousand dollars to quit.

Previous Episode /// The Boys in the Band \\\ Next Episode

Retrieved from "https://familyguy.fandom.com/wiki/The_Boys_in_the_Band?oldid=200735"
Community content is available under CC-BY-SA unless otherwise noted.