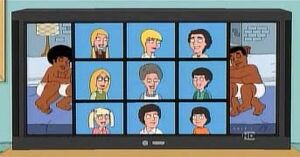 The Brady Bunch was a television situation comedy that originally aired on ABC from 1969-1974, starring Robert Reed and Florence Henderson. The premise of this show was two single parents - each with three children - get married and form a new, blended family. Joined by their housekeeper Alice Nelson, the series focuses on the Bradys as they adjust to their new life and, later on in the series, deal with issues typical of teenagers and preteen children.

In "Death Has a Shadow", the series opens with a gag is based on the 1971 episode "Where There's Smoke", where Greg (Barry Williams) experiments with smoking, decides he doesn't like it, then has a dilemma on his hands when he finds a pack of cigarettes in what turns out to be his friend's jacket. On Family Guy, Jan catches Greg smoking and reports this to Mike; an angry Mike punishes Greg by placing him in a snake pit. Jan is also punished for tattling and placed in a fire pit. Mike was voiced by Seth MacFarlane, Greg by Seth Green, and Jan by Lacey Chabert.

In "Road to Rhode Island", Stewie Griffin asks Brian to tape the episode of the show where Bobby saved Greg's life and Greg became his slave as repayment for Stewie's accompaniment on the journey. The episode he's referring to is "My Brother's Keeper", although Bobby saved Peter's life, not Greg's.

In "Holy Crap", when Peter Griffin hires a band, his dog, Brian, asks the musicians if they can "do that fluttery thing, like when the Brady kids run down the stairs." The Brady kids are then seen running down the Griffins' stairs. Cindy however stops to say something. Olivia Hack who voiced Cindy had previously played Cindy in the Brady Bunch films and would make other voice appearances on Family Guy.

A political roundtable discussion in "E. Peterbus Unum" becomes the grid from The Brady Bunch, complete with Alice in the center and a similar musical cue.

In "Emission Impossible", Stewie recalls what happened when cousin Oliver replaced Bobby on The Brady Bunch. When Bobby shows up, he is forced back into the garage by Mike Brady.

In "PTV", the show is the first to be seen after the heavy censorship by the Federal Communications Commission was lifted. The episode depicts the family standing around the toilet, Cindy showing them her defecation. This is a nod to the fact that the toilet was never seen in episodes with scenes in the bathroom. The gag ends with the signature show-ending of each of the squares containing a family member placed on the screen, one-by-one, with a musical cue from the series.

Pontius Pilate and Judas Iscariot plan to crucify Jesus as they skip away to "Sunshine Day" by The Brady Bunch in "Believe It or Not, Joe's Walking on Air".

In "Spies Reminiscent of Us", Mike Brady apparently kills his first wife after a domestic dispute, and Alice as a witness. Mike intimidates Alice into silence by asking if she saw anything; the housekeeper says that all she knows is that she's "getting a raise". Gary Cole voiced Mike while Henriette Mantel provides the voice of Alice, both having previously played the roles in the Brady Bunch films.

In "Excellence in Broadcasting", widescreen television is explained, it shows how Mike and Carol would look in bed, with three black guys flanking them on both sides. The traditional Brady Bunch grid is also shown expanded with the additional six black men. Cole and Shelley Long reprised their roles from the Brady Bunch films.

In "Livin' on a Prayer", Peter watches the first post-Roe V. Wade episode of The Brady Bunch where the kids have been replaced by animals and upscale material possessions.

Maureen McCormick, the original Marcia Brady of The Brady Bunch, turns up at the Griffin house looking to score some meth in "Farmer Guy".

Mike Brady provides advice in the 1960s when Meg tattles on Chris for running away to Woodstock in ""Family Guy" Through the Years". A pair of the kids from the show also appear during Peter's introduction.

Chris tries to spin a story about getting his jacket confused with a friend's like in an episode of The Brady Bunch in "Dead Dog Walking".

Retrieved from "https://familyguy.fandom.com/wiki/The_Brady_Bunch?oldid=207319"
Community content is available under CC-BY-SA unless otherwise noted.