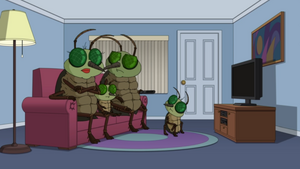 The Bugsteins are a family of insects that takes offense to Quagmire threatening to squash Brian like a bug in "Cat Fight".

when Brian threatens to shut down Quagmire's cat cafe, the latter threatens to squash him like a bug, prompting the head of the bug family to turn off the television in a cutaway gag. One of the younger insects asked if they can go ahead and keep watching to see how the Christian camp lot goes, and the father reluctantly agrees, noting that the show is on thin ice.

During another cutaway gag, Peter points out that six million Jews were killed in the Holocaust, which prompts the father to shut off the TV for good this time, noting it's too intense for the Bugsteins.

Retrieved from "https://familyguy.fandom.com/wiki/The_Bugsteins?oldid=216063"
Community content is available under CC-BY-SA unless otherwise noted.