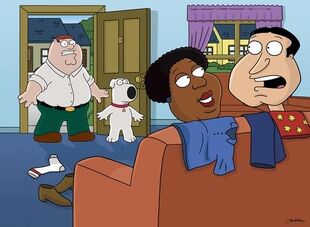 Peter and Brian catch Quagmire and Loretta having sexual intercourse

The Cleveland-Loretta Quagmire
Loretta has an affair with Quagmire. 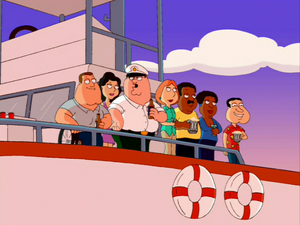 Peter invites his friends on board his fishing boat for a party at sea. While Quagmire is fishing, he catches a fish that lands in Loretta Brown’s shirt. She invites him to reach in and grab it. While Quagmire’s hand is between her breasts, Cleveland approaches and mentions the snacks Peter has supplied, serenely saying hello to Glenn before walking away. After the fish is finally extracted, Loretta propositions Quagmire to his amazed confusion. During a game of charades, Joe falls overboard and nearly drowns while attempting to portray “Natalie Wood.” His life is saved by Peter’s two Portuguese employees, who rescue Joe in a fishing net, pull him aboard, and perform CPR. Because no one in the family knew what to do in an emergency, Lois insists that they take CPR classes. Peter almost instantly has his CPR card revoked for inappropriate behavior. 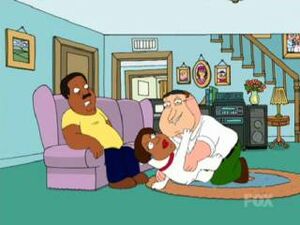 While Peter ponders taking the CPR course again, he and Brian hear screams coming from Cleveland’s house. They rush in to find Loretta having sex on the couch with a white man who has a tattoo on his buttocks. Embarrassed, they leave without seeing the man’s face, although Quagmire raises his head from the sofa immediately afterwards.

They decide that the last thing in the world they should do is tell anyone about this. So after doing everything in the world in one day, they tell Lois, the Swansons and Quagmire that Loretta is having an affair. Peter volunteers to tell Cleveland, since he has experience with delivering bad news. Meeting Cleveland at the Drunken Clam with Brian, Peter delivers the news in an overly-detailed fashion.

When Cleveland calmly questions Loretta over the affair, she angrily responds that she needs a real man. Cleveland responds in his usual mild-mannered way, even apologizing, and Loretta kicks him out of the house in disgust. The Griffins invite him to stay in their house. Lois claims Cleveland doesn’t seem affected by the fact that his wife has kicked him out of the house and cheated on him at all. Peter suggests that what Cleveland needs is a “revenge lay” and decides to ask Quagmire for advice. Quagmire is working out in revealing leopard-skin briefs when Peter and Brian arrive. They instantly recognize the tattoo on his butt and realize that Glenn was Loretta’s partner. Despite Quagmire’s pleas, Peter and Brian immediately tell Cleveland but are surprised when he shows almost no reaction.

Lois tells Cleveland that Loretta wants him to express his feelings, that women sometimes want men to be strong and stand up for them. She becomes aroused at her own motivational speech, drops her pants, showing her pink thong though she typically wears panties, and asks Peter to spank her. Brian, apparently also lost in the moment, smacks her butt instead. After a moment of awkward silence, Peter tries to get his friend to feel some passion by taking him to a wrestling match, but it affects Peter much more than Cleveland. He then puts on a Quagmire mask and molests Brian. This method finally yields results as Cleveland becomes enraged and vows to kill Quagmire. 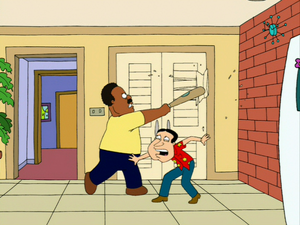 Peter realizes that he has gone too far and tries to protect Glenn by hiding him at Mayor Adam West’s mansion. West’s lunacy soon proves too much for even Quagmire, who returns home and calls Cleveland to apologize. Cleveland appears and chases Quagmire around his house wielding a baseball bat. When he finally has Glenn at his mercy cowering on the lawn, Cleveland realizes that he is unable to hurt another living person, no matter how badly they have hurt him. Peter tricks Loretta into seeing Cleveland, but instead of reconciling, the couple angrily agree to divorce.

Cleveland and Quagmire apologize to each other and, at Glenn’s insistence, take out their aggressions on each other in a boxing ring.

Retrieved from "https://familyguy.fandom.com/wiki/The_Cleveland-Loretta_Quagmire?oldid=216392"
Community content is available under CC-BY-SA unless otherwise noted.