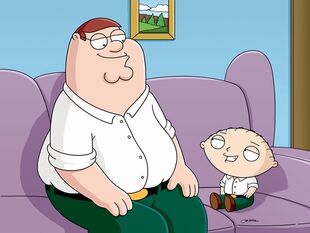 The Courtship of Stewie's Father
Stewie and Peter bond. 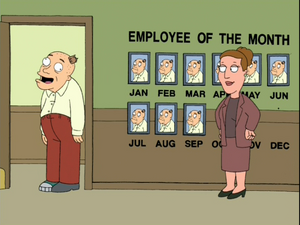 Peter gets annoyed because he never gets Employee of the Month at the Pawtucket Brewery. It always goes to his mentally challenged co-worker, Opie, and he thinks it is because his supervisor, Angela, hates him. Joe suggests that he kisses up to her. After hearing that she likes animals Peter organizes a surprise cockfight in her house when she’s away. When Angela comes home, all that remains of the chickens is a mess of blood and feathers. Weeks later, Opie does not get Employee of the Month. Instead, he gets promoted, but Peter once again comes short because of the new member Soundwave. 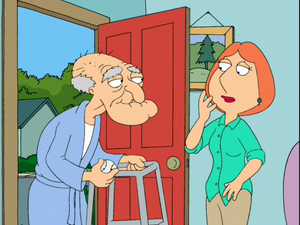 Meanwhile, Chris breaks neighbor Herbert’s window with a baseball and is ordered to do chores for him to repay his debt.

After a talk with the preschool teacher, Lois is concerned about Stewie’s behavior, and because of Peter being so occupied with work, suggests Peter to spend some time bonding with him. Peter quickly realizes that Stewie enjoys seeing him hurt Lois, and begins bonding with Stewie by playing pranks on and assaulting Lois. Lois puts up with it until Peter and Stewie drop a car with her inside into a lake. When Lois comes back and orders Stewie sent to his room, Peter backs Lois up, making Stewie feel betrayed. 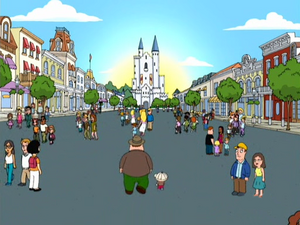 To make amends, Peter takes Stewie to Disney World in Florida. Stewie wanders off and then is captured by the security guards and put into "It's a tiny, tiny world" an attraction where they make him sing. Peter ends up going in the attraction where he finds Stewie and the other children and saves them. Michael Eisner appears and attempts to pull out Peter's heart. Peter punches him and Michael falls into a lake of crocodiles. Father and son embrace, and Stewie’s faith in Peter is restored. Peter and Stewie return home.

Previous Episode /// The Courtship of Stewie's Father \\\ Next Episode

Retrieved from "https://familyguy.fandom.com/wiki/The_Courtship_of_Stewie%27s_Father?oldid=216448"
Community content is available under CC-BY-SA unless otherwise noted.