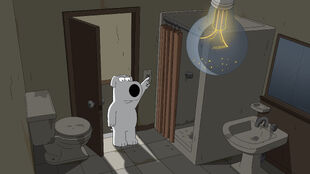 The D in Apartment 23
Brian is forced out of the house. 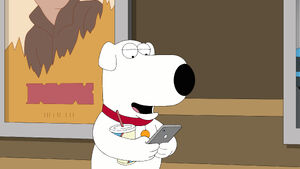 After Brian renews his interest in his Twitter account to join a protest, he starts tweeting on a regular basis. His tweets gather little attention until he makes a racially insensitive remark about a film before seeing Baywatch. While in the theater, his tweet goes viral and he exits to find an angry mob awaiting him who chase him home. Despite his attempt to delete the tweet, Brian as well as the family are treated as pariahs. Brian's attempt to apologize also falls flat and Lois tells him that he needs to move out for the safety of the family. Shocked, Brian packs up, finds a run-down apartment and settles in.

Retrieved from "https://familyguy.fandom.com/wiki/The_D_in_Apartment_23?oldid=210251"
Community content is available under CC-BY-SA unless otherwise noted.