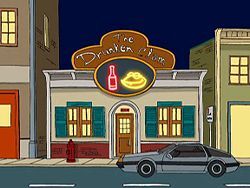 The Drunken Clam, often shortened to just The Clam, is the local Quahog bar owned by Jerome and formerly the late Horace. It is the favorite hangout of Peter Griffin, Glenn Quagmire, Cleveland Brown, Joe Swanson and sometimes Peter's dog Brian Griffin. There is also the new addition of fourth friend, Jerome, who met the guys there. They drink copious quantities of Pawtucket Patriot beer, watch TV and chew the fat, away from the women.

The Drunken Clam can be easily recognized by its animated neon sign on the roof at the front of the building. It depicts a clam swigging from a bottle and patently inebriated, judging by the xx eyes and the bubbles rising.

Many of the group's adventures are hatched or indeed even take place in the Clam.

In "One if by Clam, Two if by Sea", after a hurricane, The Drunken Clam became The Clam's Head Pub, much to Peter and the gang's disgust, as new owner Brit Nigel Pinchley took over. Despite the best efforts of the former regulars to claim back their bar, the Brits persuaded them to leave. However, after Pinchley burned down the Clam's Head Pub as an insurance fraud, and his subsequent arrest and execution, Horace returned from Florida, having had an alligator lay eggs in his lower intestine and getting into a knife-fight with his mother, losing a testicle in the process. The Clam was rebuilt and running again in no time, complete with Horace and the gang. The episode reveals that Peter has been going to the Clam at least since 1977.

It's also the place where in "Lethal Weapons", Lois pummels the seasonal invaders, the leafers from New York. Strangely the scene depicts a parking lot next to the bar where a building used to be.

In "Blind Ambition", Peter falls off its roof and kills Joan Cusack. Also, in that same episode, the bar burns to the ground when God tries to impress a woman by lighting her cigarette with a thunderbolt. God and Jesus escape by driving away in their Escalade, but a blind Peter, without realizing it, rescues Horace from the inferno and becomes the hero of the hour.

The Drunken Clam becomes a Karaoke Bar in "Don't Make Me Over", as the gang helps Horace to put the bar back on its feet against the competition from a new shopping mall. Other renovation attempts, including a Coyote Ugly theme, had previously failed.

Seen in "Stewie B. Goode", Brian takes Stewie to the Clam in an effort to persuade him of the dangers of alcohol. Brian is unsuccessful in his attempt, and so drunk that he is unable to drive, giving an equally inebriated Stewie his car keys. Stewie crashes Brian's Prius through the wall of the bar, an event captured for TV by Tom Tucker.

In "Meet the Quagmires", Death shows up when Horace falls off his ladder in the Clam, whilst trying to fix the TV - Horace is only knocked unconscious. This allows Peter to ask Death to return him to the 1980s, so he can live a wild youth. Part of that experience includes visiting the 1980s bar - then called St Elmo's Clam, a reference to the electrical phenomenon, and to the song "St Elmo's Fire". Here Peter plays "Menstrual Ms. Pacman", meets and makes out with Molly Ringwald, and joins Cleveland at an evening disco. This contradicts its appearance in "One if by Clam, Two if by Sea", where in that 1984, it was still The Drunken Clam.

The Clam's back room, complete with table tennis table, is seen in "Hell Comes to Quahog", the competitive Joe beating the others at table tennis.

Joe's depression from losing track of the perpetrator in "Ready, Willing, and Disabled" is vented in a booth at the Clam. Cleveland, Quagmire and finally Peter make embarrassed escapes from a howling Joe, Peter by squeezing through a window; he returns however to retrieve the remainder of his beer.

Peter and everyone else in the bar, including Tricia Takanawa, discover that they can survive being shot, while Death is recuperating in "Death Is a Bitch". The bar in this episode contains at least two pool tables.

Peter entertains the Clam crowd on the piano, while drunk, in "Wasted Talent".

With Cleveland gone, Peter, Glenn and Joe meet their new black friend, Jerome, in "Jerome Is the New Black", but the vacancy reopens at the end of the episode.

In "Believe It or Not, Joe's Walking on Air", the guys' significant others, Lois Griffin, Bonnie Swanson and even Muriel Goldman, wife of recurring patron Mort Goldman, as well as Cleveland's girlfriend at the time, Bernice, begin hanging out at the clam, forcing the guys to open the Quahog Men's Club. The guys were able to reclaim the Clam soon after.

If Frank Sinatra had never been born, The Clam would be long abandoned as of 2009 in the Apocalyptic Universe, as it is seen in shambles.

Horace dies in "Save the Clam", leaving the guys to try to find a way to save the bar from foreclosure. Eventually, Jerome shows up and reveals he bought the Clam with his sports earning, allowing it to stay open.

In "Finders Keepers", a waiter spins a yarn for Stewie that his placemat is a real treasure map, leading Peter to believe it is true. Refusing to give up, Peter and Lois search leads them to The Drunken Clam. Behind a painting of legendary Quahog founder Miles "Chatterbox" Musket, they find a treasure chest containing an expired restaurant coupon for a free meal which was a promotion by The Founding Father Restaurant. 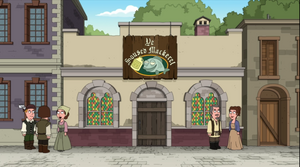 The clam is parodied as Ye Soused Mackerel in the Romeo and Juliet segment of "Heart Burn".

Retrieved from "https://familyguy.fandom.com/wiki/The_Drunken_Clam?oldid=225445"
Community content is available under CC-BY-SA unless otherwise noted.