This article is a stub. You can help the Family Guy Wiki by expanding it. 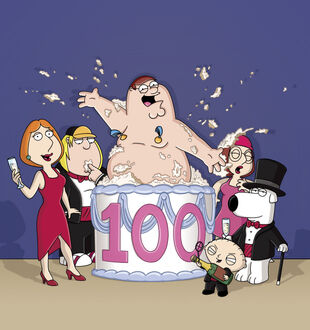 Featuring: Seth MacFarlane
Plot: This special half-hour FAMILY GUY tribute showcases the outrageous antics of the Griffin family and celebrates the side-splitting, irreverent humor of the fan-favorite animated series. Some of the funniest moments, satirical spoofs and musical numbers of the past 100 episodes are revisited.

Retrieved from "https://familyguy.fandom.com/wiki/The_Family_Guy_100th_Episode_Special?oldid=36182"
Community content is available under CC-BY-SA unless otherwise noted.