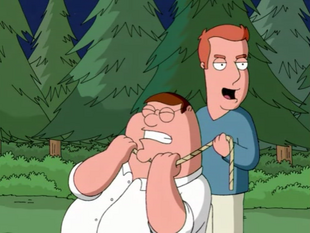 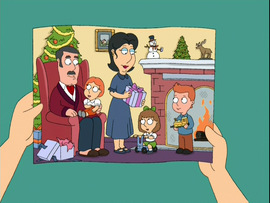 After finding an old family picture showing a brother she never knew she had, Lois sets out to find her unknown sibling. However, her father denies it, so she sneaks into her parent's house and found her brother's location. Meanwhile, after a physical with Dr. Hartman, Peter realizes that he is fat and decides to fight for fat people’s rights by founding a fat people’s club. Lois finds her brother Patrick in a mental hospital, where he’s been locked up since childhood and thinks he has a wife whom no one but him can see. After talking with him for a few minutes, she decides to take him home. There, Patrick explains that he was locked up because, as an infant, he walked in on their mother having an affair with Jackie Gleason, which emotionally scarred him. Unfortunately, Peter’s physical appearance and manners bring back the trauma from that event, and Patrick goes on a killing spree, strangling fat men. 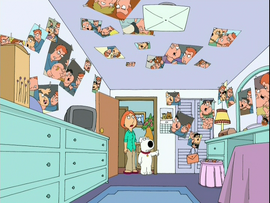 Lois is reluctant to believe that Patrick is the Strangler, even with obvious signs such as pictures of Patrick strangling fat guys, a dead fat guy in his room, a half-dead fat guy in Meg's room, and others. Finally, she gives in and believes everything, and it’s up to her and Brian to save Peter from being strangled. They arrive just in time as Patrick is strangling Peter. Lois threatens to “kill” his imaginary wife, distracting Patrick. Brian takes the opportunity to hit Peter with a rock for leaving up the car window in "To Love and Die in Dixie". By the next day, Patrick is brought back to the mental hospital and the Griffins plan on seeing him once a month.