The Father, the Son, and the Holy Fonz 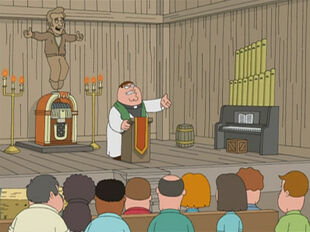 The Father, the Son, and the Holy Fonz
Peter starts his own religion. 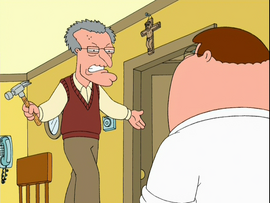 Francis Griffin, Peter’s father, who is very devout in the Catholic faith, visits Quahog and insists that Stewie be baptized Catholic. Francis and Peter go to St. Philip’s, where the priest refuses to baptize Stewie because he claims the holy water is tainted. Francis does not believe this and pushes Stewie onto the baptismal font. Stewie quickly becomes sick, so Peter and Lois take him to the hospital, where a doctor quickly and correctly diagnoses Stewie’s condition as exposure to tainted holy water. Stewie is quarantined in a germ-free environment. 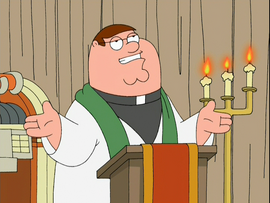 Lois asks Peter what his religious beliefs are, sending him on a quest to find a religion. At first he tries Mormonism, until he found out that Mormons can't drink alcohol, then he tries Jehovah’s Witnesses, until he finds someone actually interested in hearing what he has to say. Then he tries many others such as Hinduism, until he tackles the guy because he believes the red dot on his head is a laser spot from a sniper rifle. Francis later tells Peter he should look in his heart, so Peter starts his own religion: the First United Church of the Fonz.

This new religion borrows surface elements from Catholicism but uses Happy Days episodes as its sacred texts. To the Griffins’ surprise, many people show up for the first worship service. Brian, who’s been playing jokes on Stewie, does not like the idea of Peter being a religious leader. Brian joins forces with Francis to find other fad religions to dissipate the congregation of the Church of the Fonz. Lois cheers Peter up by telling him that if even just one person embraced the Fonz’s values of friendship, it was all worthwhile. This person turns out to be his father.

Previous Episode /// The Father, the Son, and the Holy Fonz \\\ Next Episode