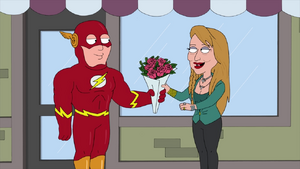 The Flash is the name of several superheroes appearing in comic books published by DC Comics known for their "super speed", which includes the ability to run, move, and think extremely fast, and possess superhuman reflexes.

In "The Woof of Wall Street", Stewie complains that Brian's greed has ruined a good team like Ricki and the Flash and confuses the superhero known as 'The Flash' for the Meryl Streep film. Brian and Stewie deny having seen the film at first, but both admit to having seen it after all.

Retrieved from "https://familyguy.fandom.com/wiki/The_Flash?oldid=203741"
Community content is available under CC-BY-SA unless otherwise noted.