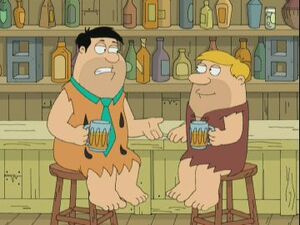 The Flintstones was the very first animated primetime cartoon series created by William Hanna and Joseph Barbera. Premiering on ABC in 1960, the show featured a community of caveman characters in typical sitcom situations. The central characters are construction worker Fred Flintstone, his wife Wilma, baby Pebbles, pet dinosaur Dino, and neighbors Barney and Betty Rubble and their son Bamm-Bamm.

The original series ran six seasons, and had numerous spinoffs and specials, one spinoff had two direct-to-video movies, and two other live-action movies, have been produced since then. A planned reboot of the show by Seth MacFarlane was cancelled in 2012.[1]

The Great Gazoo, an extraterrestrial character from the show, calls Peter a dum-dum in "Wasted Talent", as he would Fred and Barney.

In "Dammit Janet!", a news report mentions Peter and Lois Griffin being left in Cuba after their plane was hijacked. The artist’s rendering of an attractive redhead married to a fat man is of Wilma and Fred.

In "A Picture's Worth a Thousand Bucks", Peter has a talk with Meg during a walk set to Flintstones-eque music. Eventually, they notice they walked in to a Bedrock like setting and back away.

Joe Swanson's wheelchair is tipped over by a plate of dinosaur ribs delivered by a cavegirl carhop in the same manner as Fred Flintstone's car in "Ready, Willing, and Disabled".

An adult Bamm-Bamm works as a taxi driver for Elroy Jetson in "From Method to Madness".

In "Patriot Games", Fred bet with Stewie on the Mike Tyson vs. Carol Channing episode of Celebrity Boxing saying "Bet-bet-bet-bet!" just like he did in the episode "Betting Freddy".

Victor, Olivia Fuller's playmate, is cited to have starred in a Flintstones vitamin commercial with her in "Chick Cancer".

In "Road to Rupert", Peter gladly makes Meg his chauffeur after he witnessed her beating up another driver; making her cool. She takes him to a drive-in and he sticks his head out through the roof as Dino would. Meg then puts Pebbles and Bamm-Bamm on top of his head so they can see the movie.

Fred is also seen in "Believe It or Not, Joe's Walking on Air" during the Quahog Men's Club ball. He is talking to Barney about how, when he poked his head into Barney's house, he watched Betty undress for such a time that he ended up getting an e-"rock"-tion. He also mentioned that Betty kept going after she spotted him.

In "Stew-Roids", Gina states that Chris smells like Fred's ass. Fred shouts angrily that nobody asked her to do so, so her statement was unnecessary.

In "Quagmire's Baby", the families are featured in an episode of Wildest Police Chases being chased by cops. The pursuit ends at a drive-in theater where he places Pebbles and Bamm-Bamm on the top of the car. He crashes into a concession stand runs for a fence but is defeated and pounded by the cops.

In "The Cleveland-Loretta Quagmire", an infant Bamm-Bamm repeats the word "Bam!" after Emeril Lagasse said it as his catchphrase to overemphasize the onomatopoeia for sex.

In "Road to the Multiverse", Stewie and Brian unintentionally travel to a version of Quahog resembling Bedrock. The artist renditions made in "Dammit Janet!" are reality here, and Rock sex seems to be very popular here.

Peter admits that The Flintstones in Viva Rock Vegas is his favorite period piece in "Tom Tucker: The Man and His Dream".

Stewie attends a "baby rave" in "Burning Down the Bayit" and drops a "purple Betty" Flintstones chewable vitamin, claiming it sent him flying.

In "The Simpsons Guy", Fred is the judge that declares that both Pawtucket Patriot Ale and Duff Beer are imitations of his Budrock beer, although he decides that Duff wins the infringement case between the two brands.

In "The 2000-Year-Old Virgin", Meg gets a job as a tag remover, then turns to the camera and says, "It's a living" followed by "wah-wah-wah" music in reference to the birds and other animals acting as appliances from this show.

To dress Chris for "success", Peter equips him with various goods, including what he identifies as a "Wilma Flintstone" pearl necklace in "Peter, Chris, & Brian".

In "Emmy-Winning Episode", sound effects heard by Peter in Dr. Hartman's office include The Flintstones running and The Jetsons flying car.

Peter finds an old Flintstone vitamin in his coat pocket in "Griffin Winter Games" that he didn't take because it was Barney.

Retrieved from "https://familyguy.fandom.com/wiki/The_Flintstones?oldid=220998"
Community content is available under CC-BY-SA unless otherwise noted.