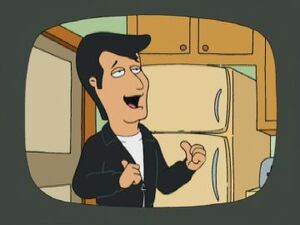 Arthur Herbert Fonzarelli (also known as Fonzie, The Fonz, or Fonz) is a fictional character played by Henry Winkler in the American sitcom Happy Days that ran from 1974–1984. He was originally a secondary character, but eventually became the lead. By the mid 1970s, he dwarfed the other characters in popularity.

In "The Son Also Draws", The Fonz was Peter Griffin's spiritual guide while lost in the forest with his son Chris. He told Peter that he should start paying attention to Chris more and accept his drawing abilities.

Later, in "The Father, the Son, and the Holy Fonz", Peter goes on a quest to find his religion. After experimenting in main religions, his father Francis tells him to look into his heart, and that results in the creation of Fonzism, a religion devoted to Fonzie. Peter converts his shed into The First United Church of the Fonz. While successful at first, Sherman Hemsley comes to convert people to a religion devoted to George Jefferson, and Kirk Cameron converts the rest back to Christianity. Although Fonzism is disbanded, Francis is shown praying to the Fonz at the very end of the episode.

Peter says he is one of his son Chris's friends in "April in Quahog".

Retrieved from "https://familyguy.fandom.com/wiki/The_Fonz?oldid=176660"
Community content is available under CC-BY-SA unless otherwise noted.