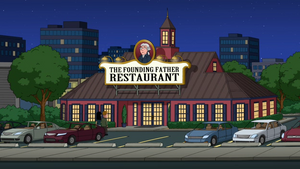 The Founding Father Restaurant is where the Griffins go out to eat to celebrate finding the cause of Peter's bad breath in "Finders Keepers".

While there, a waiter spins a yarn for Stewie that his placemat is a real treasure map, leading Peter to believe it is true. Refusing to give up, Peter convinces the entire town that he is on to something and treasure fever strikes, with everyone becoming ruthless toward each other in the effort to find the treasure. After Peter realizes he has abandoned his own family in his own efforts, he returns to Lois who redirects their own personal search to The Drunken Clam. Behind a painting of legendary Quahog founder Miles "Chatterbox" Musket, they find a treasure chest containing an expired restaurant coupon for a free meal which was a promotion by The Founding Father Restaurant.

Retrieved from "https://familyguy.fandom.com/wiki/The_Founding_Father_Restaurant?oldid=150677"
Community content is available under CC-BY-SA unless otherwise noted.