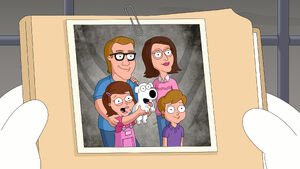 The Hendersons are a family that Brian learns he previously belonged to in "Who's Brian Now?" after landing in a shelter when he gets drunk on moonshine that Peter made.

When he learns that they are the opposite of the Griffins in being well-off and well-educated, with the now grown children away at Harvard, he has trouble deciding which family suits him better. He decides to move back in with the Hendersons, but finds he isn't treated like a member of the family as before. Meanwhile, the Griffins to try to move on without him but Peter decides to get him back. He breaks into their house and assaults them in order to take Brian back, but finds an extremely favorable jury when he goes to trial.

Retrieved from "https://familyguy.fandom.com/wiki/The_Hendersons?oldid=232165"
Community content is available under CC-BY-SA unless otherwise noted.