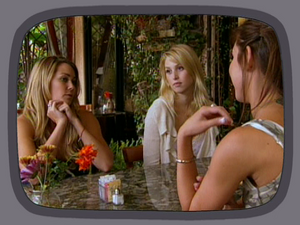 The Hills is an MTV television series that premiered on May 31, 2006 and ended July 13, 2010. The show uses a reality television format, following the personal lives of several people living in Los Angeles, California. At one point, the series follows the personal life of former Laguna Beach star Lauren Conrad and her friends' new lives in Los Angeles. After five seasons, Conrad chose to leave the series.

In "We Love You, Conrad", the Griffin family watched an episode in the Family Guy animation style. Later, Brian started dating Conrad, and he and Stewie were invited to the set. It is revealed that Spencer Pratt is a real ape, as revealed in a discussion with his wife Heidi Montag. Later, in the producers room, it is revealed that The Hills is filled with street sign transition sequences and old clips from The A-Team. Only a small portion of it is the actual show, which in this scene, was shown in live action. Audrina Patridge, Whitney Port, and Brody Jenner also appear.

Retrieved from "https://familyguy.fandom.com/wiki/The_Hills?oldid=214972"
Community content is available under CC-BY-SA unless otherwise noted.