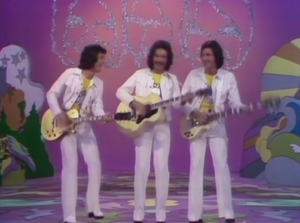 The Hudson Brothers were an American musical group consisting of brothers Bill Hudson, Brett Hudson and Mark Hudson. An appearance on the Sonny and Cher Show resulted in them performing in their own variety half-hour series, The Hudson Brothers Razzle Dazzle Show, which ran from 1974–75. They also released numerous singles during this time.

After Chris accidentally sells Quagmire a pilot's cap reported to be from Sully Sullenberger in "And Then There's Fraud", the latter proudly shows it off to Peter who is confused when he says he's going down on the Hudson, confusing it for the Hudson Brothers which leads to a clip of the The Hudson Brothers Razzle Dazzle Show opening.

Later, Sully allows Quagmire to believe he actually has his cap at a signing at the Hudson News bookstore and let's beat her know that if Quagmire feels better for thinking he has that cap, he's not going to destroy that dream. When Peter questions why the bookstore is named the Hudson News, Sully speculates that it's because it's owned by the Hudson brothers, which restarts the clip before Peter can stop it.

Retrieved from "https://familyguy.fandom.com/wiki/The_Hudson_Brothers?oldid=230659"
Community content is available under CC-BY-SA unless otherwise noted.