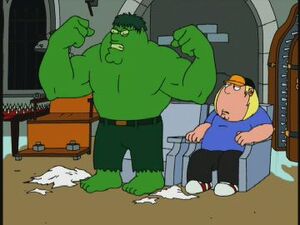 Robert Bruce Banner, better known as The Incredible Hulk or The Hulk, is a fictional character appearing in comic books, TV and movies published by Marvel Comics. Created by Stan Lee and Jack Kirby, the character first appeared in The Incredible Hulk #1 (May 1962). The Hulk is cast as the emotional and impulsive alter ego of the withdrawn and reserved physicist Dr. Bruce Banner. The Hulk appears shortly after Banner is accidentally exposed to the blast of a test detonation of a gamma bomb he invented. Subsequently, Banner will involuntarily transform into the Hulk, depicted as a giant, raging, humanoid monster, leading to extreme complications in Banner's life.

In his imagination, Peter Griffin turns into the Hulk using the catch phrase "You wouldn't like me when I'm angry" from the TV show in "Chitty Chitty Death Bang".

Peter plays the closing theme to the show, titled "The Lonely Man" for Stewie in "Wasted Talent". The song is reprised during the closing credits.

In "Emission Impossible", Peter asks Lois' sister, Carol, to say “David Banner, I just slashed your tires” before he rips through one of her ex-husband Ted’s shirts. This is meant to mimic the transformation of David Banner into the Incredible Hulk.

The opening sequence of "And I'm Joyce Kinney" parodies that of the series. It shows Stewie replacing David Banner, Tom Tucker replacing the Jack McGee character and Peter as the Hulk.

Although the DVD commentary for "Cool Hand Peter" acknowledges the vast number of shows doing a chain gang-themed episode, they specify their inspiration for the episode originated in "The Slam" episode of The Incredible Hulk.

In "Chap Stewie", Jeremy Piven stars in The Incredible Hulk in which he states that a passer-by wouldn't like him angry and is told he isn't liked at present.

In "Our Idiot Brian", Stewie accuses Brian of being as useless as the Black Widow of The Avengers when he prefers to stay dumb. Black Widow is questioned by Captain America, Iron Man, Thor, Hulk and Hawkeye as to her powers, which she only offers up as kicking. While the rest of the team jokes at her expense, Hulk tries to stay out of it, but is accused of just trying to be nice.

Peter proposes to Lois that they push Chris' anger in the uncensored version of "Bookie of the Year" to see if he becomes the Hulk.

In "HTTPete", on Marvel's The Offenders, a parody of The Avengers, Harvey Weinstein speaks using the Hulk's traditional speech patterns.

When Brian gets a Hummer as a loaner car after his Prius is involved in an accident in "Girl, Internetted", he and Stewie decide to tease environmentally conscious and Marvel's Cinematic Universe's Hulk Mark Ruffalo by doing donuts on his lawn, but find out to their dismay that he really is the Hulk as he pitches them and the Hummer into New Hampshire.

The Incredible Hulk at the Hulk Wiki