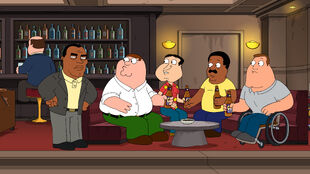 The Jersey Bore
Peter attends a business conference in Atlantic City with Preston. 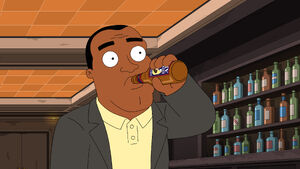 When Preston Lloyd has to go to Atlantic City to meet with their distributor, he takes Peter along with him since he's the least valuable number of the staff. This depresses Peter until his friends talk him into taking them along so that they can all hang out. But when Preston finds out that Peter is driving, he invites himself along as well so the guys have to hide in the back of the car. When they arrive, Preston informs him that this is a working trip because they are in danger of losing their distributor, forcing him to keep the guys undercover longer. He finally gets a chance to slip away when Preston takes a power nap, but they are all caught later at a bar and the latter tells Peter that he'll never amount to anything. Peter challenges him for never even tasting their product, so he decides to give it a try. The next morning, the guys awaken a state of disarray and find a message from Preston asking for help. Unable to locate him, Peter starts to give Preston's presentation, but finds he is losing the clients, so he improvises his own based on his own experience with beer and manages the save the contract. Afterwards, Preston appears and states that he did it intentionally because after sampling beer and finding it totally disgusting, he realized that only a drunk like Peter could truly explain it. They finish out their time in Atlantic City together watching the bodies float in from the ocean at the pier. 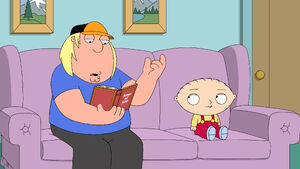 Meanwhile, Chris finds out the new girl is going to be in a play of Romeo and Juliet and that they need an emergency replacement for Romeo so he works to take the role and Stewie volunteers to coach him. Thanks to his intervention during the audition, lands him the part. However, Stewie clashes with Principal Shepherd over the direction of the play so the latter leaves it in his hands, influenced by a romantic opportunity with a fake persona of Stewie's. The new girl offers to let Chris kiss her for real during their rehearsal, but Stewie's direction forces her out of the play as well. Chris' pathos over losing his chance reaches the level of acting that Stewie was striving for. The show goes on and is a success, with Stewie taking the Juliet role.