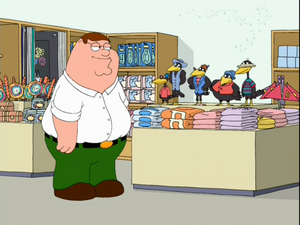 They appear in "The Courtship of Stewie's Father", when Peter loses Stewie at Disney World, he asks the Jim Crows if they've seen him. They respond in a stereotypical way, and Peter comments on the racism.

Retrieved from "https://familyguy.fandom.com/wiki/The_Jim_Crows?oldid=151111"
Community content is available under CC-BY-SA unless otherwise noted.