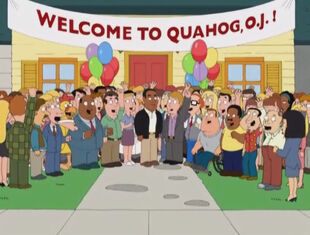 O.J. Simpson at the Griffins' home

The Juice Is Loose
Peter cashes in a raffle ticket from 1989 and earns a golf outing with O.J. Simpson.

Plot: According to an opening title card, this is one of several recently discovered "lost episodes" found in the Griffins' basement; it takes place in March 2007. 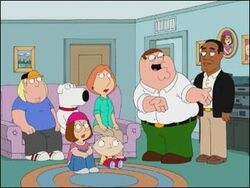 After a fiasco involving Stewie's attempting to fix their satellite TV and getting stuck on the roof while Peter was supposed to be watching him, Peter attempts to go fix it himself. While looking in a draw for his tools he comes across a winning 1989 raffle ticket he had forgotten to cash in, winning him a chance to play golf with O.J. Simpson; however, he had been unaware until now that Simpson was accused and acquitted of murder, and grows fearful. His friends suggest he spy on Simpson during the game and try to get him to confess the murder, hooking him to a wire. When his cover is blown, Simpson laments having lost a chance of escaping accusation. Feeling guilty, Peter decides that Simpson is innocent and befriends him. 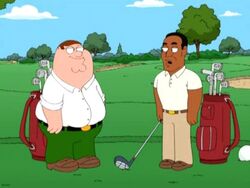 Peter brings Simpson home with him to meet the family, which is initially less tolerant of Simpson than is Peter, though they manage to live under one roof without any major conflicts. Word soon gets out of Simpson's presence in Quahog, so Peter decides to throw a house party to help everyone else get to know him better; instead they are met with an angry mob intent on driving Simpson out. Simpson makes a heartfelt speech saying that he is just as imperfect as everyone else, and the residents of Quahog apologize. Then, for no apparent reason, Simpson takes out a knife and kills three people before running off, the mob giving chase; as the Griffins look on, Peter indifferently declares, "I guess he did do it."

Previous Episode /// The Juice Is Loose \\\ Next Episode

Retrieved from "https://familyguy.fandom.com/wiki/The_Juice_Is_Loose?oldid=216335"
Community content is available under CC-BY-SA unless otherwise noted.