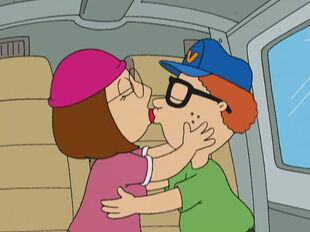 Meg kisses Neil in a time of desperation

The Kiss Seen Around the World
Meg gets a job at the local TV station. 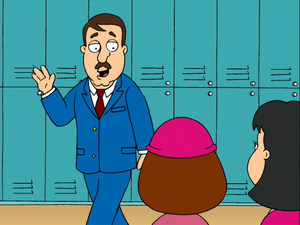 Channel 5 announces they want two high school interns, and Meg, who has a crush on news anchor Tom Tucker, applies and is selected only because Diane considered the other other girls to be too pretty. The other intern turns out to be Neil Goldman, who himself has a crush on Meg, though Meg finds him repulsive. When the Mass Media Murderer threatens to kill Hugh Downs atop City Hall, Tom and Diane decide to send the interns to cover the event rather than go themselves, thinking that the Murderer will kill anyone who arrives at the scene. The news copter is shot down. Fearing death and lamenting that she never got her first kiss, Meg kisses Neil, but Hugh Downs captures the Mass Media Murderer. That very night, Neil puts the kiss on the news.

The next day, Neil gives everyone at school a T-shirt showing the kiss, and that evening, Meg has to suffer through a dinner with his parents.

In return, Meg goes on TV to declare she hates Neil Goldman, and that she only kissed him was because she thought she was going to die. She then conducts on-the-street interviews, asking if anyone would kiss Neil. No one would; even when Meg shows the picture of Neil to his father, he shields his eyes in disgust. She declares that she never liked him, and never will. 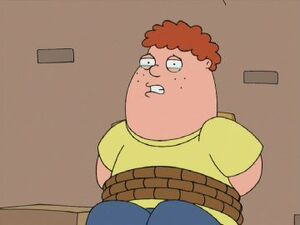 A despondent Neil threatens to jump off the City Hall roof. Meg’s image of Tom Tucker is shattered when she realizes he doesn’t want to save Neil, but just get a funny story for ratings. Neil falls, but Meg breaks his fall. She tells him that just because she doesn’t like him, it doesn’t mean she wants him to kill himself. However, Neil said he never wanted to kill himself. At that moment, a guy calls him a phony.

Meanwhile, Peter and Lois buy Stewie a tricycle, which Stewie absolutely loves. A bully steals Stewie’s tricycle. He gets no help from the police and, when he attempts to bulk up to fight the bully, a gym just tries to hard-sell him a membership. In retaliation, Stewie captures the bully with a net launcher and ties him up in the basement to interrogate him. Finally, Lois returns the tricycle, which she found abandoned on the street.

Previous Episode /// The Kiss Seen Around the World \\\ Next Episode

Retrieved from "https://familyguy.fandom.com/wiki/The_Kiss_Seen_Around_the_World?oldid=216416"
Community content is available under CC-BY-SA unless otherwise noted.