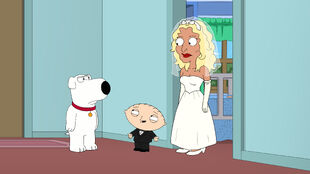 The Marrying Kind
Stewie gets a mail order bride. 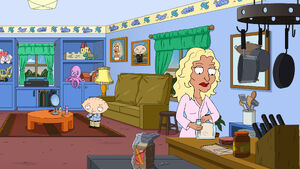 Mort invites the guys and their families to New Orleans for his wedding to his new girlfriend, Rachel. Stewie is so taken with the ceremonies that he gets his own mail-order bride from the Ukraine. To support his new bride, he takes a job at a car rental agency, while resisting her demands for sex. But when he finds that she has sex with Brian, he takes a baseball bat to Brian's car before breaking down in tears. Realizing a solution to his problem, Stewie allows Brian to have sex with Zolata so he doesn't have to but reserves the rest of the marriage chores for himself. When she leaves him anyways, he looks forward to quitting his job at the rental car agency, only to find he's been promoted to assistant manager. 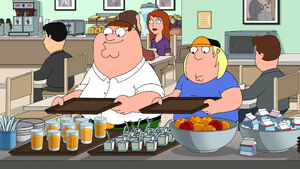 While in New Orleans, Peter and Chris fall in love with the hotel's breakfast buffet. Unsatisfied with Lois' cooking, they start sneaking into local hotel buffets. Their habit encourages Chris to suggest they try to break into the fanciest hotel buffet in town. However, during their meal, Chris slips him a note revealing that he was caught at one of their buffets and is being used to trap Peter. He manages to escape, but Chris is sent to jail where Peter sneaks in by killing guards and taking their uniforms so that they can continue to eat together.

Retrieved from "https://familyguy.fandom.com/wiki/The_Marrying_Kind?oldid=231205"
Community content is available under CC-BY-SA unless otherwise noted.