[For a complete script, see: "The Movement" at the Transcripts Wiki]

Peter: I love coming to the ballpark. Drunken Irish in front of a fishbowl of minorities. What could go wrong?

[Chris finds container]
Chris: Meg's estrogen suppliments?
[Meg shows up with a beard and a deep voice]
Meg: I'll take that, thank you.

Stewie: Dad gave me a sip of beer. I'm gonna mention that to my teacher and it's gonna be a big problem.

Lois: Hey, Bonnie. Who's on first?
Bonnie: Who? The person's name or the pronoun?
Lois: Ha. And it goes on like this.

Joe: It's my day to shine.
Peter: Huh?
Joe: Yeah. Handicapped person at the ballpark. Ramps, private escort, meet the team.
Guy: [offscreen] Is there a Joe Swanson?
[Peter throws Joe out of his wheelchair and sits in it]
Peter: Right here!
[The guy takes Peter to meet the team]
Peter: Meet me at that sad balcony.

Carter: Where am I gonna get another coach?
[Homer Simpson is shown in the audience]
Homer: I'm on vacation!
Carter: Ah, darn. That would have been funny.

Peter: Just FYI, I'm either gonna finish too quick or not at all.

Peter: I'm a baseball coach now. You knew that when you married me.

[Peter calls Meg into his baseball player office]
Peter: Hey, thanks for coming. Take a seat.
Meg: What's up?
Peter: [sigh] This is really the toughest part of the business, isn't it?
Meg: Oh my God. Are you trading me?
Peter: Looks, it's nothing personal. You've been very professional as a family member but ... here's the thing. We're sending you down to American Dad!.
Meg: No! What? No!
Peter: Well, they're not excited about it either. I guess I could call The Orville.
Meg: [sigh] I'll do American Dad!.

[The Quahog Whooping Scalpers beat one of their members to a bloody pulp]
Peter: Way to go, you. All this is happening because you did something well.

[Unable to pleasure her himself, Peter calls in a hot young man to have sex with Lois for him]
Peter: Alright, bring us home, kid. Bring us home. Little bingo. Ducks on the pond. Furry ducks. Little man on the boat. If you can find it, you're a better man than I am.

Tom: Good evening, I'm Tom Tucker, joined tonight by a very special guest, Channel 5's own Tom Tucker, Sr., who hasn't been on the air since 1964. Take it away, dad.
Tom Tucker, Sr.: Thanks, Tom. More and more women are choosing to work outside the home. I call them prostitutes.
Tom: And that's a wrap for Tom, Sr.

Chris: I can't believe my dad's a hero.
Peter: Oh, I'm no hero. I'm just a white guy doing what black people were already doing. In other words, a hero.

Brian: I'm no different than my peers. Rosa Parks, Nelson Mandella, Dr. Martin Luther King, hey did you ever notice he has the names "Doc" and "Marty" in his name?
Stewie: Let it go.
Brian: Hello, Twitter.
[Brian tweets his joke and immediately gets a massive flood of replies]
Brian: And I have to move out again.

TV Announcer: We now return to Seinfeld, which keeps getting edited down more and more for syndication.
Soup Nazi: NO SOUP FOR-
[Episode ends]
Peter: Funny show.

Lois: You know what? This while activism thing has gone on long enough. You knelt at one game. It's not like opportunity's gonna come knocking at the door, offering you money for it.
[Someone knocks at the door and Peter answers it]
Guy: Hi, I'm the president of Nike. How would you like some money?
Lois: [offscreen] FOR CRYING OUT LOUD!

Peter: [narrating a Nike commercial] How do you know what's inside of you unless you test yourself? Don't do one pushup. Do one hundred. Don't run one mile. Run a marathon. Don't have one family. Have a second family all the way across the country. Don't just have a second family. Have a third family in Santa Fe with an alternative lifestyle. Don't spend any time with the first two families. Make a commitment to family number three. Double down by announcing it at his war hero father's retirement party. Don't go to the funeral cuz remember, you've got two other families to deal with and a marathon to train for. Don't let Kenneth walk out of your life. Take his life from him. Don't just go to jail. Go to death row by killing the two other families. Don't just let anyone have their closure by apologizing. Send a message that you're not afraid of Hell.

Carter: Peter, ever since you made that stupid commercial, my ticket sales have tanked. Thanks to you, people now think The Quahog Whooping Scalpers are racist.

[Birds get crushed to death in an escalator]
Carter: Oh, Disney's not gonna like that.

Cleveland: Welcome to Waquahog.
[Cleveland shows Peter the glorious view of Qaquahog]
Peter: Oh my God. Why wasn't this The Cleveland Show?
Cleveland: This entire episode would have been our season five premiere.

Peter: Better give him a big tip.
Cleveland: Pretty sure the tip is already built into the service charge.

[Carter gestures to his nose, indicating he wants to do coke]
Carter: Hey, what do you say we take a pit stop in the little boy's room?

Peter: Carter, I know you're just trying to honor the troops.
Carter: I never said that.

Peter: I'm making my way to the bathroom. I have to poop again. 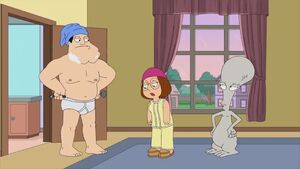 Retrieved from "https://familyguy.fandom.com/wiki/The_Movement/Quotes?oldid=223854"
Community content is available under CC-BY-SA unless otherwise noted.