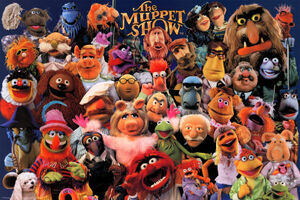 The Muppets are a group of puppet characters created by Jim Henson. Individually, a Muppet is one of the puppets made by Jim Henson or his company's workshop. Although the term is often used to refer to any puppet that resembles the distinctive style of The Muppet Show such as on Sesame Street, the term is both an informal name and legal trademark linked to the characters created by Henson.

The word "Muppet" itself was said by Henson to have been created by combining the words "Marionette" and "puppet". However, Henson was also known to have stated that it was just something he liked the sound of, and he made up the "marionette/puppet" story while talking to a journalist because it sounded plausible.

Episodes of Family Guy that Muppets are referenced in:

Retrieved from "https://familyguy.fandom.com/wiki/The_Muppets?oldid=219742"
Community content is available under CC-BY-SA unless otherwise noted.