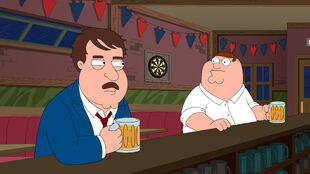 The New Adventures of Old Tom
Tom is replaced by a younger reporter. 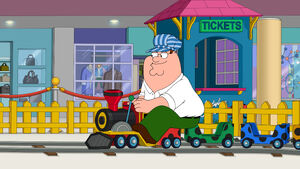 When Peter wears out Lois' underwear in one of his stunts, she makes the family go to the mall so she can get more. When she is ready to go, Peter's delays result in him being left behind. When the mall closes, he decides to ride the kiddie train that he was denied a ride on earlier, but as he looses control of it, they shut off the lights, leaving him riding it throughout the night.

The next day, the news picks up the story of Peter's ordeal and the wives are attracted to Dallas Portland, the new reporter at Quahog 5 News. They gather to watch as a group, leaving Peter alone. He complains at the Drunken Clam to Jerome and finds company in a depressed Tom Tucker who hates the new guy as he is being groomed to replace him. Peter suggests they work together to improve Tom's image as a “young guy.” They try to make a Go-Pro skate video, but that ends when Peter is mauled by a bear. Peter joins Lois to watch the newly made-over Tom, but his act fails when he tries to give himself a tattoo near his eye during the broadcast and he is fired. Lois is upset with Peter and he points out her infatuation with Dallas, although she still insists on him trying to make it up to Tom. He visits him at his apartment but his help is rejected. Peter exits to see Tom standing on the rooftop preparing to jump, so Peter rushes to the rooftop and Dallas arrives right behind him to cover the suicide. However, Peter insists that he is the one who plans on jumping and gives Tom the interview, apologizing in the process. Tom talks him out of it, but ends up falling off himself when Peter is startled by a pigeon, luckily, landing on other people. 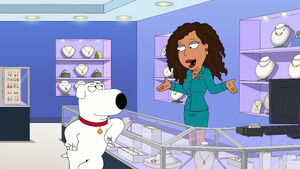 Meanwhile, Stewie and Brian walk through the mall and he is attracted to Shelby, a biracial girl working at a jewelry store. He tries to impress her by posing as rich and buys a $10,000 ring with the intention of returning it later. When he sets out to take it back when she gets off of her shift, he finds Chris has swallowed it. At Quahog Natural Foods, they try to find a fiber cereal to help him to pass it, but end up surrounded by grey-haired lesbian art teachers when they seek advice for a cereal to choose. They take him to a fast food restaurant, and find many other patrons looking to defecate or vomit. Running out of time, they start to fight over the pressure but they rush to the store, just barely making it. However, not only is Shelby still on duty, but Chris drops his load in front of her, resulting in her dumping Brian for lying to her.

The next day, they start to wrap things up, with Tom getting his job back due to the high ratings the potential suicide drew. From outside, a man who was hoping to score with Lois if she could fall for a guy like Peter comes searching for her, announcing that he is rich and whisking her away in his helicopter.

Previous Episode /// The New Adventures of Old Tom \\\ Next Episode

Retrieved from "https://familyguy.fandom.com/wiki/The_New_Adventures_of_Old_Tom?oldid=186951"
Community content is available under CC-BY-SA unless otherwise noted.