The Old Man and the Big 'C' 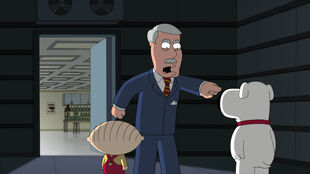 The Old Man and the Big 'C'
Brian and Stewie discover Carter Pewterschmidt has found the cure for cancer.

Plot: At a ballgame, Quagmire accidentally loses his toupee going for a fly ball. When he becomes a laughingstock he decides to ditch the wig. The change in his appearance affects his attitude, changing him into an old man. The guys become reluctant to hang out with him and convince him to get a hair transplant. 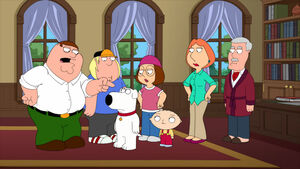 At the hospital for the transplant, Brian wanders off and overhears that Carter has terminal cancer. He returns and tells Stewie who confirms it via online camera in the Pewterschmidt house. Brian tells Lois who rounds up the family and heads for her parent's home, but when they arrive they find Carter in good health and Brian loses his credibility. Brian suspects that Carter is an impostor in order to protect the family business interests and convinces Stewie to come with him to prove his theory. They follow Carter around in order to prove he is an impostor, but discover he has a cure for cancer. 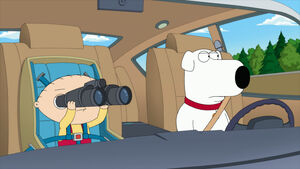 Carter reveals that he has been sitting on the cure since 1999 in order to protect his sales of treatment pharmaceuticals and throws Brian and Stewie out. As Brian fumes on their way home, Stewie reveals that he stole the cure. They take it home to show Lois but Carter arrives to take it back and Brian tells what it is. Lois is appalled but Carter refuses to show pity until she brings up some of his closest loved ones possibly dying of cancer and he promises to reveal the cure. But the next day in a press release he only gives the news of a deodorant. Lois calls to find out why he didn't reveal the secret as Carter blows her off with the fact that he lied. Peter assures her that they'll get over the fact that Carter's a bad man when he's shown on the cover of a magazine; which is exactly what happens when Carter appears on the cover of Forbes.