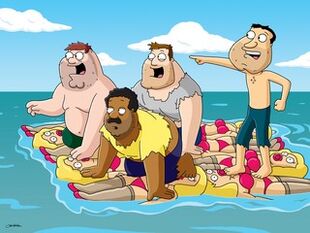 The Perfect Castaway
After returning from his presumed death, Peter finds that Lois has married Brian.

Plot: Peter is having difficulty with catching enough fish to feed his family forcing him to fire his two Portuguese employees Santos & Pasqual. Peter decides to go in search of fish at Pelican’s Reef at the suggestion of salty Seamus to find the fish he needs to make more money, with Glenn Quagmire, Joe Swanson, and Cleveland Brown tagging along for the free beer. They find the fish, only to find themselves adrift at sea after a hurricane destroys their boat. They would have been killed if not for the raft they were able to build out of Quagmire’s sex dolls. Unfortunately, they had no food, so Peter eats Joe's unused legs. 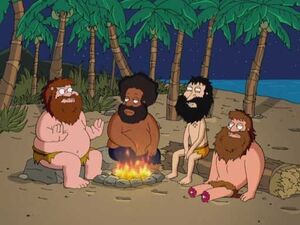 After being presumed lost at sea, a memorial service is held for the sailors. Brian marries Lois to support the family, working as a salesman at a Hummer dealership. However, he and Lois sleep in separate beds, much to Brian’s frustration.

Several months later, the four men are rescued from the island by a passing cruise ship. They were spotted just as they are attempting to pass the time with group homosexual intercourse. Joe gets a new set of legs from a death row inmate who got the electric chair. Unfortunately for Joe, he was also a paraplegic. 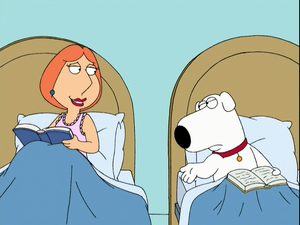 Peter finally returns home and meets his family. When Peter is about to kiss Lois, she admits that she has married Brian. After Lois tells him why she is with Brian, Peter leaves and gets a room in a hotel in Downtown Quahog. Brian wants to talk to her about the situation she is in. In an attempt to win Lois back, Peter goes to the house, where Lois finds him naked and lying on the couch. Lois is eventually convinced into having sex with Peter on the tipped over chair, where Stewie finds them and is shocked, but takes a video of it. The next night, Lois runs out of the house with a saddle and Brian now gets suspicious that she is cheating on him. Stewie shows him the video and Brian is crushed. He goes to the hotel that Peter is staying at and sees a silhouette of Peter and Lois having sex. When Brian gets to their room, Lois tells Peter that she made a commitment to Brian and must stay with him. When Lois gets home, Brian divorces her and she goes back to Peter. The next day, everything is back to normal and everyone in the family is glad to have Peter back. However, Lois admits that she was a day away from having sex with Brian. Brian is shocked at this revelation and tells the family he’ll be in the basement. Upon being asked what he’s going to do, his response is “WHAT DO YOU THINK?!”

Retrieved from "https://familyguy.fandom.com/wiki/The_Perfect_Castaway?oldid=216385"
Community content is available under CC-BY-SA unless otherwise noted.