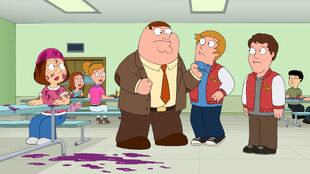 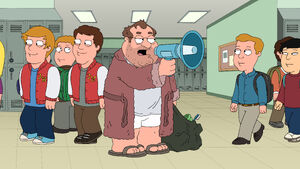 When Principal Shepherd suffers a breakdown during his divorce, the school board seeks a parent volunteer. When Peter considers it, Lois tries to talk him out of it but only convinces him to take on the job after all. He ingratiates himself with the students, although when Meg is suffering from being tormented by bullies is picked on in front of him, turns the tormenting back on the bullies. Meg, who had been critical of her father being Principal until this point, is encouraged by her friends to use him as a weapon to get back at those that have wronged them. But as Peter is prepared to take revenge to extremes, the school board arrives, based on an anonymous tip and is able to restore Principal Shepherd, who has restored his mental state after a sex trip to Thailand. Peter apologizes for not being a good Principal to Meg, but she lets him know she appreciated him being a great dad instead. 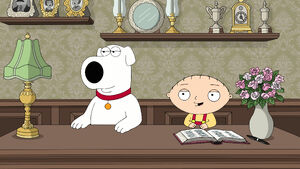 Meanwhile, Brian is perturbed by the lack of quiet while working on another novel, and admits to Stewie that at that point in his life, he'd imagined that he's have a nice place with rooms he could let out for spare cash. Stewie suggests his dream home would be something like a bed and breakfast and they agree to go into business together. However, they find their clientele are Johns bringing in prostitutes. Deciding to expand on what seems to be their base, Stewie brings in prostitutes to work for them directly. Eventually, the prostitutes suggest they should just kill the pair and take over. When Brian and Stewie step onto the porch to prepare a counter offer, they are locked out, although Stewie angrily demands his loaf a raisin bread back which is obligingly pushed through the mail slot. Faced with no other options for recourse, they adjourn toward a bench on the opposing side of the street to munch the bread while they watch the police arrive to bust the brothel after Stewie calls to report it. As they observe the proceedings, a UPS truck arrives with marmalade jars that Stewie had ordered as part of the bed and breakfast. He waves the driver off and informs Brian about the ability to refuse packages by declining to accept.

Retrieved from "https://familyguy.fandom.com/wiki/The_Peter_Principal?oldid=194689"
Community content is available under CC-BY-SA unless otherwise noted.