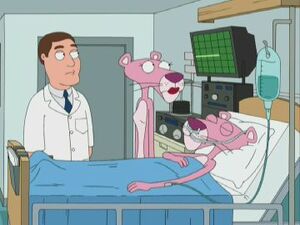 The Pink Panther is the main and title character in a series of animated short films. The character originally appeared in the opening and closing credit sequences of the 1963 live-action feature film The Pink Panther. The popularity of the character spawned a series of animated short films, and the character would appear in the opening sequence of every film in The Pink Panther series except for A Shot in the Dark and Inspector Clouseau. The original Pink Panther cartoons were produced by DePatie-Freleng Enterprises, is in the TV animation industry, but in 1981, the studio was sold to Marvel Comics and renamed Marvel Productions. David DePatie and Friz Freleng continued to serve as executive producers for the series while the animation was produced by Hanna-Barbera Productions and MGM/UA Television.

The Panther was frequently used in advertisements for Owens-Corning Fiberglass insulation. In "The Former Life of Brian", he dies as a result of inhaling so much fiberglass over the years, with his wife by his side.

After Brian Griffin is spraypainted pink by bullies in "Halloween on Spooner Street", the Pink Panther walks by and tells him "Welcome to Hell", implying that Brian too will be subject to ridicule, followed by the final chord of Henry Mancini's iconic "Pink Panther" theme.

Retrieved from "https://familyguy.fandom.com/wiki/The_Pink_Panther?oldid=181659"
Community content is available under CC-BY-SA unless otherwise noted.