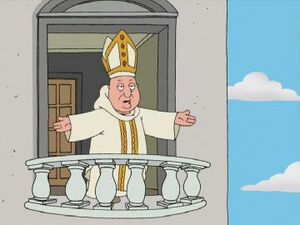 The Pope is the Bishop of Rome, a position that makes him the leader of the worldwide Catholic Church which is composed of the Latin Rite and the Eastern Catholic Churches in full communion with the see of Rome. The current office-holder is Pope Francis, who was elected in a papal conclave on 13 March 2013.

The character makes an appearance in three episodes, and is depicted as Italian, while the Popes who have served over the show's run, Pope John Paul II, Benedict XVI and Francis, are Polish, German, and Argentinian respectively.

In "Holy Crap", Peter Griffin "kidnaps" the Pope during a tour of the United States, in an attempt to convince his father Francis that he is a good son. Afterwards, Francis becomes his assistant by nagging people to stop doing sinful things, no matter how menial. As of the initial airing of episode, Pope John Paul II held the position, but was not depicted.

In "Road to Europe", the reluctant Pontiff is awakened by an aide, and told off like a naughty child for not putting his discarded night clothes in the laundry. He then is told to put on his hat and address the crowd in St Peter's Square, Rome. Again like a petulant child, the Pope comments that it is a stupid hat. As the Holy Father is addressing the faithful, Brian and Stewie Griffin drift past in their balloon, catching the Pope and dropping him unceremoniously, to get caught up on a statue, exposing his nakedness. Later, when Brian and Stewie have landed, the Pope catches up with them and threatens that God will smite them for making a fool of him. He waits expectantly, but nothing happens.

In "It Takes a Village Idiot, and I Married One", Peter takes the family on a camping trip, and informs them that they should keep their food up high so the Pope can't get it. He hangs a string of sausages over the branch of the tree, just as the Pope runs on screen and tries to grab the sausages.

When visiting the new neighbors in Cleveland's old house in "Bigfat", Peter points out that it feels weird, just like when a new Pope moves into the Vatican. Pope "XXIV" complains about still getting Pope "XVIII's" magazines, but after going through the subscriptions, elects to keep receiving Boys Life.

A figure representing the Pope works in the kitchen of the Italian restaurant operated by Frank Sinatra, Jr., Brian and Stewie in "Bookie of the Year".