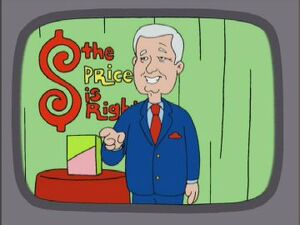 Brian Griffin was watching an episode and expressed distaste at Barker's reminder to spay and neuter one's own pets in "Brian in Love".

The set of Survivor is apparently on the same set as The Price is Right, as revealed when Peter Griffin was a contestant on Survivor and knocked over the reality show's backdrop in "Screwed the Pooch".

In "The Fat Guy Strangler", a female contestant bids one dollar higher than the man next to her, a common occurrence on the show. The contestant she shafts has a word with her.

In "It Takes a Village Idiot, and I Married One", it is revealed the Griffins took a less than pleasurable trip on the Cliff Hangers game, led by the mountain climber. The contestant bid too much, so everyone fell of the mountain and into the rocks.

Peter then wishes they went with friend Cleveland Brown to Plinko instead, where Cleveland is seen enjoying himself bouncing in the wheel on the game board. Unfortunately, the drop seen does not earn the contestant any money, upsetting Cleveland.

Peter also told Tracy Flannigan that they would be going to see or be a part of the show in "The Former Life of Brian". In reality, Peter was having her pick up her son Dylan Flannigan so Brian would stop being an emotional wreck about him.

Prince was once a contestant on The Price is Right, as seen in "Tales of a Third Grade Nothing".

The hosting transition is finally acknowledged in "New Kidney in Town", when Carey guest stars as himself, hosting the episode in which Peter is a contestant. He gives an extremely lengthy shoutout to many of the characters on Family Guy. After spinning the Big Wheel really fast the wheel eventually comes loose from its mooring and rolls into the audience and through the back wall, leaving a trail of bloodied, mangled bodies behind.

In "Stewie Goes for a Drive", a contestant is shown getting the lower-valued showcase which consists of a hammock, a box of chalk, and a trip to her parent's house in Wilmington, Delaware, as she laments rescheduling her abortion.

While Evelyn is kissing Peter at The Drunken Clam in "Mom's the Word", The Price is Right comes on TV.

A May 6, 2015 comic panel of Pop Culture Shock Therapy features Bob as the host of TPiR, as well as Peter and Brian.

When Joe becomes a paraplegic in "Brokeback Swanson", he tries to watch TPiR while manipulating the television remote with his mouth, but causes the volume to increase.

In "The New Adventures of Old Tom", all of the models on The Price is Right have been replaced with males, resulting in a male contestant rejecting a car that is offered.

Retrieved from "https://familyguy.fandom.com/wiki/The_Price_is_Right?oldid=186702"
Community content is available under CC-BY-SA unless otherwise noted.