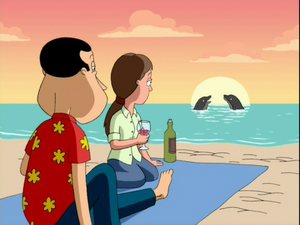 The Screaming Black Dolphins are a type of dolphin mostly found near Quahog, Rhode Island.

They first made an appearance in "I Take Thee Quagmire" in the ocean witnessing the marriage proposal by Glenn Quagmire to his girlfriend Joan on the three week anniversary since they began dating.

They also appear in the DVD version of "It Takes a Village Idiot, and I Married One" when Bob Grossbeard and the Quahog Oil Refinery resumes dumping waste into Lake Quahog. All of the fish and the lake were just killed when the dolphins appeared.

They later appeared in Blue Harvest as the black little droids that go around the Death Star.

Seamus observes the dolphins while fishing in "Follow the Money".

The dolphins are voiced by Darrel Heath and Alex Thomas.

Retrieved from "https://familyguy.fandom.com/wiki/The_Screaming_Black_Dolphins?oldid=202635"
Community content is available under CC-BY-SA unless otherwise noted.