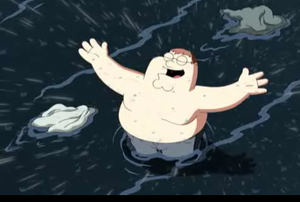 The Shawshank Redemption is a 1994 American drama film written and directed by Frank Darabont, loosely based on the Stephen King novella Rita Hayworth and Shawshank Redemption. The film stars Tim Robbins as Andrew "Andy" Dufresne and Morgan Freeman as Ellis Boyd "Red" Redding.

The film portrays Andy spending nearly two decades in Shawshank State Prison, a fictional penitentiary in Maine and his friendship with Red, a fellow inmate.

Stewie Griffin says he carved "Brooks was here", referring to a character from the film, in Lois' birth canal in "Play It Again, Brian".

In "Model Misbehavior", Stewie refers to Brian's worms as "Shawshanking" their way through his intestines.

In "Tiegs for Two", after Brian picked up Peter from the police department, Peter claims that prison is the only world he has ever known after being there for 15 minutes and then he was shown hanging himself making a reference to when Brooks hung himself after being released from prison and not being able to live outside of prison.

Connie D'Amico and her friends tease Meg in "Dial Meg for Murder" as she fills a sack with pop cans, asking her if she is taking them to the "Shawskank" Redemption Center.

Bob Gunton who portrayed Warden Samuel Norton in the film provides the voice of the warden in "Cool Hand Peter".

Obsessed with Quagmire's Korean soap opera in "Candy Quahog Marshmallow!", Peter declares he hasn't been into something so big since The Shawshank Redemption. A cutaway shows Peter at a Q&A session with director Frank Darabont, Morgan Freeman and Tim Robbins questioning how the poster was replaced so tightly in the prison cell from the inside.

After being kicked out of the Chateau Marmont in "Inside Family Guy", Peter moves to a dingy apartment where he observes graffiti noting "Brooks was here," referencing a scene from the film.

In "Shanksgiving", Peter mentions Brooks waiting on the outside. Another prisoner whispers to him that Brooks hung himself as in the film.

When Peter is grounded by Lois in "Undergrounded", the former tries to figure a way out and wonders how Brooks escaped in The Shawshank Redemption, oblivious that Brooks was not the one who escaped. As a result, Peter hangs himself similarly to Brooks's death from being unable to cope after being released.

Retrieved from "https://familyguy.fandom.com/wiki/The_Shawshank_Redemption?oldid=223948"
Community content is available under CC-BY-SA unless otherwise noted.