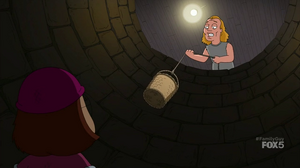 The Silence of the Lambs is a 1991 crime horror film starring Anthony Hopkins and Jodie Foster. Foster played FBI agent Clarice Starling who tries to find Buffalo Bill, a serial killer who kidnaps young women, imprisons them,and kills them. The film was nominated for seven Academy Awards and won five, including Best Picture and Best Actress for Foster.

Chris' voice is inspired by Ted Levine's Buffalo Bill character in The Silence of the Lambs. [1]

In "Stuck Together, Torn Apart", Brian and Stewie find a little girl trapped in a well and Stewie looks down and quotes Buffalo Bill's repeated line: "He rubs the lotion on its skin or else it gets the hose again."

In "Stew-Roids", Meg and Connie D'Amico embarrass Chris in front of the whole school by showing them a video of him parodying Buffalo Bill's naked dance to the song "Goodbye Horses" from the film.

In the DVD cut of "And Then There Were Fewer", Stewie asks Brian who the star of the film was and Brian replied: "Tony Hopkins"; thinking he knew Hopkins on a first name basis.

When Lois goes to Franz Gutentag's house looking for Peter and Chris in "German Guy", Franz says, "Is he a great big fat person?", a reference to The Silence of the Lambs.

Meg is kidnapped by Buffalo Bill in "Guy, Robot", but Peter's biggest concern is finding his grocery club card. Bill suggests he simply give them his phone number so they can look it up.

Retrieved from "https://familyguy.fandom.com/wiki/The_Silence_of_the_Lambs?oldid=218040"
Community content is available under CC-BY-SA unless otherwise noted.