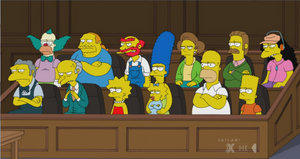 The Simpsons is an American animated television series created by Matt Groening for the FOX Broadcasting Company. The series is a satirical parody of a working-class American lifestyle epitomized by its eponymous family, which consists of Homer, Marge, Bart, Lisa, and Maggie Simpson. The show is set in the fictional city of Springfield, and lampoons American culture, society, television and many aspects of the human condition.

The family was conceived by Groening shortly before a pitch for a series of animated shorts with the producer James L. Brooks. Groening created a dysfunctional family and named the characters after members of his own family, substituting Bart for his own name. The shorts became a part of The Tracey Ullman Show on April 19, 1987. After a three-season run, the sketch was developed into a half-hour prime time show and was an early hit for FOX, becoming the first FOX series to land in the Top 30 ratings in a season (1989–1990).

Since its premiere in late 1989, over 650 episodes have been produced and broadcast by FOX, which also broadcasts Family Guy. A feature film was also released in 2007. Family Guy has often been accused of being a rip-off of The Simpsons. There have been a number of Simpsons-related gags in episodes of Family Guy. Seth MacFarlane has stated that Matt Groening is a friend of his and there is no real rivalry between the two shows. The show broke two Guinness World Records, Longest Running Primetime Television Show and Television Show with the Most Guest Stars.

The Simpsons on Family Guy

In a special Police Squad!-style opening in "PTV", Stewie runs Homer Simpson over with his toy bike in the garage. His attempt to run away is analogous to running away from the car. Here, he does not crash through the door, and is knocked unconscious.

In "Mother Tucker", Brian mentions Stewie selling out. The resulting flashback parodies the Butterfinger commercials The Simpsons did in the early 1990s. Stewie says Bart Simpson’s catchphrase from the commercials, “Nobody better lay a finger on my Butterfinger,” before adding a forced “D’oh!” in reference to Homer's catchphrase.

Marge Simpson and Glenn Quagmire are seen together in a fake promotion for the show in "Movin' Out (Brian's Song)". After enjoying their time together, Marge brings Quagmire to Springfield to have more fun. After a long night of sex with Marge, Homer catches them in the act. The Simpsons family is then killed in one-by-one a chain reaction shooting by Glenn. This scene was omitted from all FOX broadcasts at the insistence of Simpsons producers, who did not allow the voice actors to reprise their roles for the scene. It is only available on the uncensored versions.

In a DVD exclusive song in "Lois Kills Stewie" called "I've Got a Little List", one of the "society offenders" on Stewie's list is "The guy who watched The Simpsons back in 1994 and won't admit the damn thing isn't funny anymore".

Homer appears in "The Juice Is Loose" at O.J. Simpson's "Welcome to Quahog" party, as the Simpson Mayor Adam West was referring to. He uttered his catchphrase "D'oh!".

Peter Griffin called Handi-Quacks the next Simpsons during his pitch to Peter Chernin in "FOX-y Lady".

In "Big Man on Hippocampus", Peter, who had amnesia, can't remember his catchphrase, so he uses Homer's annoyed grunt, "D'oh!".

The font used for Simpsons credits is used for the executive producers of "Dial Meg for Murder".

Peter's yellow color and remarking that he could go on for twenty more years in "New Kidney in Town" is a reference to The Simpsons.

In "Cool Hand Peter", the jury of the trial of Peter, Joe, Quagmire and Cleveland consisted of Homer, Marge, Lisa, Bart, and Maggie Simpson, Krusty the Clown, Comic Book Guy, Groundskeeper Willie, Edna Krabappel, Ned Flanders, Otto Mann, Moe Szyslak, and Mr. Burns. Peter is at first relieved to find that it's a jury of their peers but Joe points out that they don't see it that way.

The Simpsons is referenced in "Family Guy Viewer Mail No. 2" when Stewie says that Family Guy is based on it.

In "Ratings Guy", Homer rushes to report having broken television only to have Peter brag that they beat them to it. Here, Homer is voiced by Dan Castellaneta, the first time on Family Guy he does so.

In "Boopa-Dee Bappa-Dee", Bart Simpson is among the characters Stewie morphs into when Peter Griffin fools with the remote.

A drunken Peter recounts several of the Simpsons adventures such as Maggie's first word, Mr. Plow and Bart jumping the canyon as his greatest moments in life in "Save the Clam".

The Griffins travel to Springfield and meet the Simpsons in "The Simpsons Guy".

In "Guy, Robot", Peter drunkenly admits that the show actually steals a lot from The Simpsons.

Chris uses "cowabunga" when asked to provide references in "The Boys in the Band".

In "Inside Family Guy", a photo of Brian is shown waving to a tour bus of fans, but behind him is the Simpsons' studio and the intended attention of the fans.

During a montage of crime-fighting in "Cop and a Half-Wit", the Simpsons family is exposed on their couch with puzzled looks when Peter unzips the scene.

Lois makes note of Family Guy's failed attempt to ride The Simpsons for a shot at an Emmy in "Emmy-Winning Episode". The show also appears on the library computer as one that consistently wins Emmys.

When Vladimir Putin notes that things in Russia are slightly sub-par to things in America in "Petey IV", Peter inquires about The Simpsons, only to find out that they only have Family Guy.

In "celebrating" sixty years in the air in ""Family Guy" Through the Years", Peter diminishes the role The Simpsons have had on Sunday night television. It is also claimed that Family Guy began as a sketch on a larger show, a nod to The Simpsons beginnings on The Tracey Ullman Show.

In "Married...With Cancer", Jess has having sex in Moe's Tavern on her bucket list.

Mr. Burns and Smithers observe Peter assigned to collecting recyclables in "Pawtucket Pete", although Burns refers to him as 'Simpson.'

When Lois calls FOX to complain about being paid less than Peter in "You Can't Handle the Booth!", she is forced to listen to the theme from The Simpsons while on hold.

When Carter Pewterschmidt needs a manager for his minor league baseball team the Quahog Whooping Scalpers in "The Movement", the camera cuts to Homer who protests he's on vacation, leaving Carter disappointed because he thought it would be a funny gag.

When Peter falls into a coma in "Coma Guy", Dr. Gravitas tells the Griffins that he can still hear them and to talk about how much they love him. After a few seconds of total silence, Lois turns on the TV. A voice is heard announcing The Simpsons is on. We then see Peter hallucinating about him and Homer walking in and out bushes, referencing The Simpsons episode "Homer Loves Flanders".

In "Fecal Matters", Peter compares his feud with Ernie the Giant Chicken to that of Bart Simpson and Sideshow Bob.

While handing out trick or treat candy in "Must Love Dogs", Lois dresses as Marge Simpson.

When Stewie is sent to elementary school to serve a detention in "The Birthday Bootlegger", he discovers a fourth grade Bart Simpson already there.

When Peter walks through the hedges to confront his new neighbor and his friends in "Lawyer Guy", he emerges as Homer Simpson briefly before shaking it off.

Family Guy on The Simpsons

At the end of "Missionary: Impossible", Betty White asks viewers to help keep crude programming on the air, while the television next to her features a Family Guy title card. 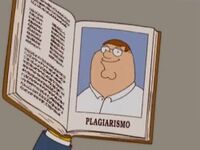 Peter appeared in The Simpsons episode entitled, "Treehouse of Horror XIII", where he was as one of the hundreds of clones of Homer, in "Send in the Clones". Peter also appeared in "The Italian Bob", where he was wanted for plagiarism, implying that Family Guy was accused of ripping off The Simpsons, and Stan Smith was wanted for plagiarism of plagiarism, implying that American Dad! was accused of ripping off Family Guy, which itself is already a ripoff.

Seth MacFarlane appeared in the show's 20th anniversary special entitled The Simpsons 20th Anniversary Special in 3-D! on Ice!. He was also referred to in The Simpsons Game based on the series, when Homer answers that MacFarlane is his creator and "TV's most beloved animation visionary!".

During the end credits of "Homerland", the Griffins, the Smiths from American Dad!, the Browns from The Cleveland Show as well as other Animation Domination characters get to line up for a chance to sit on the couch while Homer is denied entry.

In "'Tis the 30th Season", Disney's purchase of FOX is commented on as Lisa finds out they are building a Family Guy World.