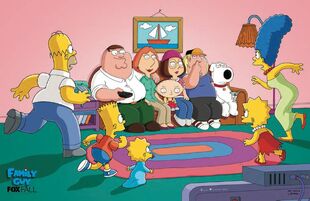 Plot: When Peter gets annoyed by an unfunny comic strip, he decides to draw his own. His art is a hit at first, but when he offends women with his strip and the Internet turns against him, he tries to clear his name on Joyce's show which backfires. Faced with an angry mob at the door, the family decides to flee for their safety until things blow over. 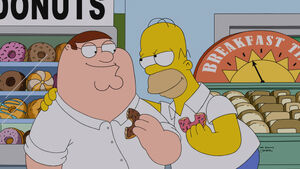 After driving all night, the family stops at a gas station but while they are inside, their car is stolen, leaving them stranded in Springfield. Walking through town, they admire the town. As Peter tries to find the police station, they stop in at the Kwik-E-Mart for a snack. Apu recommends the donut which they are unfamiliar with and also reveal they are out of money. Homer Simpson offers to buy their donuts for them and introduces himself, introducing them to the proper way to enjoy donuts. 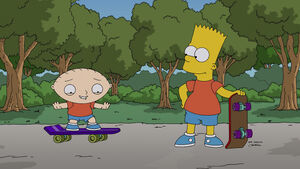 At the police station, Peter tries to report the theft, but is turned away since he doesn't contribute to the police man's ball. The Simpsons put up the Griffins in their home until things improve. Bart shows Stewie and Brian his "weapons closet consisting of only his slingshot and his type of mischief, but when he prank calls Moe, the joke falls flat when Stewie tries his hand. Lisa shows Meg her room, but when trying to build up Meg's self-esteem, Peter shuts her down. Chris and Maggie bond but Brian finds himself stuck with Santa's Little Helper. The guys share their jobs stories, with Peter impressing Homer with his brewery job. Peter enlists Homer for them to find his car together. Chris and Brian take Santa's Little Helper for a walk, and Brian tries to teach him independence, but he runs off when freed, leading them on a chase through town until he gets lost in a pack of dogs intended for the menu at Krusty Burger. Bart teaches Stewie how to skateboard, but when Nelson pounds Bart after getting a bad grade while copying him, Stewie plots revenge. Planting a trap, he shoots Nelson with a knockout dart. 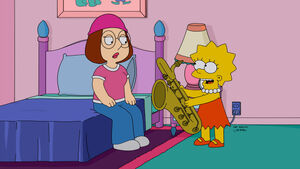 As Homer and Peter try to figure out to find the car, their stunts keep backfiring. Lisa tries to find something Meg is good at. But when Lisa explains using her sax to support her feelings, she allows Meg to try it and she is a success right off the bat, although Lisa down plays her talent. Nelson awakes to find he has been kidnapped by Stewie who tortures him by making him eat his shorts. The ladies go to a movie, but Lois is less then pleased with the trip. Marge notices Santa's Little Helper missing and Chris and Brian tries to fake his presence. The guys take a break but when made to go back to work on finding the car, they try to deploy a giant magnet. But when packing it up when they realize they don't have a giant power outlet, Hans Moleman runs them over having accidentally taken the wrong car when looking for his pants. The guys celebrate by going to Moe's where Peter tries to introduce Homer to Pawtucket Patriot and they find a label stuck over Duff beer as legal action is threatened.

In court, Peter is forced to defend the brewery to save Quahog. The actions cause animosity between the towns, running into the similarities across the board. With Fred Flintstone as judge, he finds for Duff although he also notes they are both imitations of his Budrock. The family prepares to leave for Quahog where Peter faces the prospect of finding a new job. Brian nearly reveals he lost Santa's Little Helper until he arrives on his own. Meg shares that she cut her name into her arm for she'll always remember Lisa who giver her her sax. Bart and Stewie do their goodbyes where Stewie points out that he took revenge on all of Bart's enemies. Bart is freaked out and bids him goodbye. 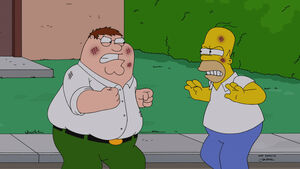 As Homer looks sadly on the Griffins leaving and looks at the headline of the court decision, he tries to explain his actions. Peter reacts angrily and they start to fight, which causes the usual chicken-fight mayhem all through Springfield, until they crash into the nuclear power plant. As Homer fights with the Emmy's they have won, they wreck the plant and they both fall into the reactor, giving them super powers to continue their fight. Crashing into Kodos and Kang's spaceship, they wreck it. As it crashes back to earth, they lose their powers. Landing in Springfield Gorge, their final blows nearly finish each other off until the spaceship crushes Homer, at least temporarily. Dragging himself up, he finds Peter laughing and noting they should keep their shows separate.

Returning home, they find things have blown over and Pawtucket Patriot Ale safe since the Simpsons won't come to Quahog to shut it down. Stewie tries to pretend he is over Bart, but does the chalkboard gag, promising not to think of Bart while crying.