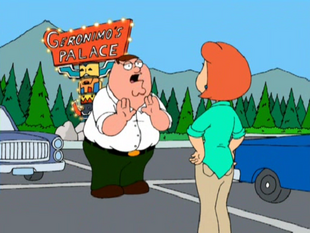 Looking for the car at the casino

The Son Also Draws
One wrong turn forces Peter to become one with nature. 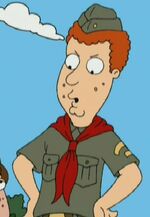 Chris is not enthusiastic about the Scouts, preferring to draw. He is eventually kicked out of the Scouts, and Peter insists on getting Chris back in by talking to the New York headquarters. During the trip, the family sidetracks from their journey with Lois obtaining a gambling addiction and losing their car at an Indian casino. 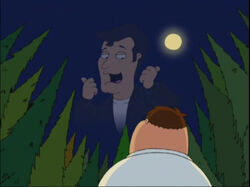 In order to reclaim their car from the casino owners, Peter claims that he is Indian, but is denied the identity of "Jeep Grand Cherokee", and instead, being sent on a vision quest. Chris accompanies Peter, and during the quest, the two of them bond, with Peter finally accepting Chris' complaints about the Scouts. The episode finishes with Peter hallucinating and seeing Fonzie from his starvation and reclaiming the car.

Meanwhile Brian stays at home and watches a television show that lowers his intelligence.

Retrieved from "https://familyguy.fandom.com/wiki/The_Son_Also_Draws?oldid=216440"
Community content is available under CC-BY-SA unless otherwise noted.