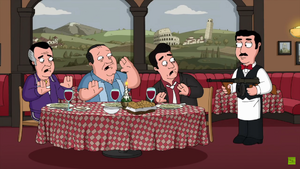 The Sopranos is an American crime drama television series revolving around the fictional character and family of mobster Tony Soprano.

Christopher Moltisanti, Tony Soprano's protégé helps Stewie in "Sibling Rivalry". At first implying they were going to bury Bertram, however, they were actually planting a tree.

At the end of "Lois Kills Stewie", Brian says the fact that most of the two episodes had been a simulation would be a giant middle finger to the hypothetical viewer, and Stewie says "At least it didn't end like The Sopranos when it just cut to black in mid sen..." then the episode does exactly that just as the final episode of The Sopranos did. In "I've Got a Little List", a musical number from the same episode, the cut to black is also mentioned.

In "You Can Find It on TV", a musical number opening for the 59th Annual Primetime Emmy Awards, Brian and Stewie again mention the cut to black.

When Vinny gets surprised about learning who Carter Pewterschmidt is in "Christmas Guy", he goes "Oh!" like his voice actor, Tony Sirico's character, Paulie Gaultieri in The Sopranos.

In "Bookie of the Year", Chris plays an arcade game about pounding a "big pussy," which turns out to be Salvatore "Big Pussy" Bonpensiero from the show. In the same episode, Tony Soprano, Paulie Gaultieri and Christopher Moltisanti eat at the restaurant opened by Frank Sinatra, Jr., Brian and Stewie.

Retrieved from "https://familyguy.fandom.com/wiki/The_Sopranos?oldid=214530"
Community content is available under CC-BY-SA unless otherwise noted.