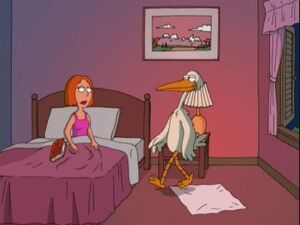 The stork is voiced by Michael Clarke Duncan. Here is the video just in case you didnt see it https://m.youtube.com/watchv=qscwb1heari

Retrieved from "https://familyguy.fandom.com/wiki/The_Stork?oldid=222941"
Community content is available under CC-BY-SA unless otherwise noted.