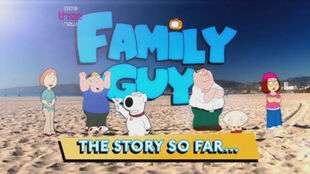 The Story So Far
Behind the scenes special

Featuring: Seth MacFarlane
Plot: A behind-the-scenes special first broadcast in the BBC Three. It was broadcast as part of "Family Guy Night", a celebration to prelude the UK premiere of Season 7. This episode lets the audience know a little bit more about the characters and how Seth made Family Guy.

Previous Episode /// The Story So Far \\\ Next Episode

Retrieved from "https://familyguy.fandom.com/wiki/The_Story_So_Far?oldid=164850"
Community content is available under CC-BY-SA unless otherwise noted.