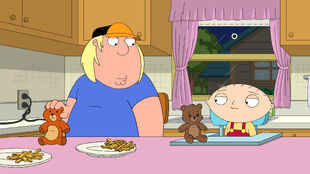 The Talented Mr. Stewie
Stewie and Rupert "break up". 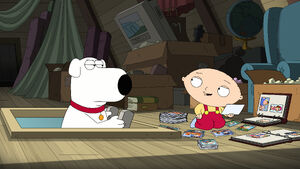 When Stewie has a good day at daycare, he shares the news with Rupert. When he later decides to make a collage to celebrate their relationship, he discovers that Rupert previously belonged to Chris and possibly Peter before that. Feeling betrayed, he gives Rupert back to Chris, who could care less, and tries to strike up a relationship with a stuffed giraffe. However, this doesn't work out so he tries to to get another bear, but strikes out again. Meanwhile, thanks to a hidden nanny cam in Rupert, he finds that his relationship with Chris is going fine. 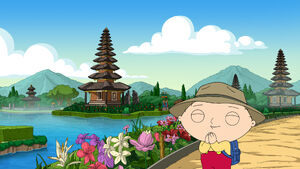 Unable to cope, he goes on a world adventure to find himself but decides he still needs to kill Rupert and Chris. He rents a lake house invites Chris and Rupert to dinner, but reveals his plan just a little too early. he still manages to knock out Chris and paddle them out to the lake, but when he has second thoughts Chris almost recovers and tell Stewie knocks him out again and throws him overboard. However, a last message from his nanny cam reveals that Chris actually loves him and had planned to give Rupert back. With a struggle, Stewie is able to rescue Chris. While the latter recovers in the hospital, Stewie's mannerisms suggest he should best keep their events a secret, as Doctor Hartman enters hoping they can get a heart from Chris.

Retrieved from "https://familyguy.fandom.com/wiki/The_Talented_Mr._Stewie?oldid=226847"
Community content is available under CC-BY-SA unless otherwise noted.