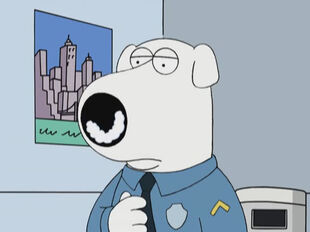 The Thin White Line
Part 1 of 2 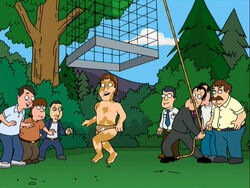 When Brian tells his therapist that he is in a bit of an emotional rut, his doctor suggests that he may be too inwardly focused and that perhaps doing some volunteer work may be a good idea. Brian takes him up on his advice, serving as a guide dog for the blind and elderly. But it isn't until Joe gives Brian the chance to be a drug-sniffing dog for the Quahog Police Department that he really finds something he takes to. In fact, on his first day on duty at the airport, Brian successfully tracks down a suitcase full of cocaine, but inadvertently takes a snort of it himself.

Meanwhile, Peter attends the Happy-Go-Lucky Toy Company Picnic and wins Mr. Weed's challenge, walking away with the prize of a week's paid vacation. 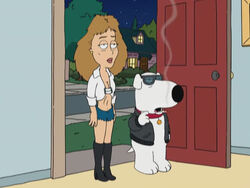 Brian continues to excel as a member of the police force, but his problems with cocaine mount until he ends up with a full-blown addiction. After he shows up at the house high on drugs, the family decides to stage an intervention. Ultimately Brian agrees to enter rehab, forcing Peter and the family have to cancel the cruise they had planned until after Brian's treatment. Peter, disappointed at not being able to sail the seas in style and in awe of the fancy amenities at Brian's rehab rehab facility, decides to fake his own addiction in order to "vacation" at the detox clinic.

Before long, Peter's obnoxious behavior attracts the attention of the clinic's head doctor, and despite his initial attempts to ignore Peter, Brian gets sucked into Peter's antics. When the doctor claims that Peter is the "X Factor" responsible for driving Brian to his addiction, Brian indignantly exits rehab with Peter. Back at home, the family celebrates Brian's return, but he drops a bombshell on them. Saying his experience has shown him that everyone is responsible for his own destiny, Brian says he's off to follow his own personal journey. With that, Brian hails a cab, drives off, and the episode ends with a "To Be Continued..." setting the stage for the next episode, "Brian Does Hollywood".