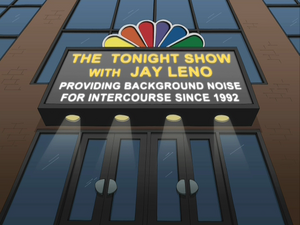 The Tonight Show with Jay Leno is an American late-night talk show hosted by Jay Leno that initially aired from May 25, 1992 to May 29, 2009, and resumed production on March 1, 2010. It is both the fourth and sixth incarnations of the Tonight Show, with former Late Night host Conan O'Brien hosting the fifth, in-between Leno's stints.

In the alternate timeline in "Meet the Quagmires", Chevy Chase is the host of the Tonight Show, and Ed McMahon is still his sidekick. His guests for the episode seen were George Clooney, Dave Chapelle, and Harry Connick, Jr..

Jesus appears as Jay's guest on The Tonight Show with Jay Leno in "I Dream of Jesus". Dave Coulier appeared in the same taping to promote a Full House DVD release. Joss Stone was a guest as well, however she went unseen, as she appeared after Jesus.

In "We Love You, Conrad", the show appeared in live action, and part of Jay's monologue targeted Lauren Conrad and her relationship with Brian Griffin.

The DVD cut of "And Then There Were Fewer" features a conversation between Seamus and Herbert regarding CBS being right for their generation, but they both agree that they change the channel in order to watch The Tonight Show with Jay Leno.

Jeff and Brenda Quagmire watch The Tonight Show with Jay Leno in "Screams of Silence: The Story of Brenda Q.".

Retrieved from "https://familyguy.fandom.com/wiki/The_Tonight_Show_with_Jay_Leno?oldid=119139"
Community content is available under CC-BY-SA unless otherwise noted.