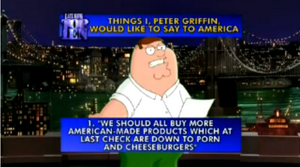 The Top Ten Things I, Peter Griffin, Would Like to Say to America is a Late Show Top Ten List delivered by Peter Griffin on Late Show with David Letterman on February 23, 2006. His son Stewie would later deliver a Top Ten list in December 2009.

And the Number One Thing I, Peter Griffin, Would Like to Say to America:

Retrieved from "https://familyguy.fandom.com/wiki/The_Top_Ten_Things_I,_Peter_Griffin,_Would_Like_to_Say_to_America?oldid=174238"
Community content is available under CC-BY-SA unless otherwise noted.